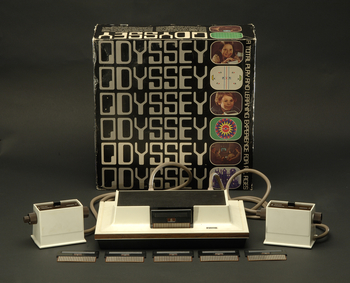 The Odyssey was released in April 1972 for $100 (adjusted for 2020 inflation, ~$662), and was the first home console of any kind, even predating Pong. It was also the first cartridge-based console, but there's a catch: The cartridges don't contain games, they just rearrange the circuitry inside the console to vary the game. And it was the first to have a Light Gun, but you don't aim the gun at any part of the screen, you just aim it at the screen (or any other light source).

The Odyssey employs technology of The '50s, known as discrete circuits. Individual transistors, diodes, resistors, and capacitors are wired together to build logic modules. There are no chips. It was designed for ball-and-paddle games, and it draws three squares and a vertical line to represent the four basic elements of such games: Two players, a ball, and a net or wall. Plastic screen overlays provide color and background graphics. Each controller has three knobs, controlling the horizontal and vertical positions of their squares, and the "english" to put on the ball.

One of the tennis games gave Atari co-founder Nolan Bushnell the idea for Pong. Magnavox filed suit, and would continue to file suits against console and arcade game manufacturers for the next 10 years, because Odyssey designer Ralph Baer had patented the idea of a video game console

And that Light Gun attachment? In order to produce and manufacture such a peripheral, Magnavox partnered with a then-smaller Japanese company by the name of Nintendo. This partnership gave Nintendo their first taste of the video game business; they would export the Odyssey to Japan, and within a few years they would be making games of their own.

Sales started out well (it sold over 330,000 units worldwide), but fell after people incorrectly assumed the Odyssey only worked on Magnavox TVs (which in turn was because they were told such by Magnavox salespeople). Baer suggested extending the system's shelf life by producing "active" cartridges which would contain additional circuitry and allow for more elaborate games, but his superiors didn't think it'd be worth the effort.

Production ended in 1975, and it was replaced by the Odyssey 100, which used chips and had sound, but had no cartridges and played only two games: tennis and hockey. Later Odysseys added a game or two, color graphics, and on-screen scoring. These used a combination of discrete circuits and a few chips, and were obsolete after 1976, when General Instruments released the AY-3-8500 Pong-on-a-chip.

The cartridges could remove some of the boxes, adjust their size and position, and change their behavior (i.e., turn collision detection on or off). Overlays added background graphics. Each game was a combination of one (or more) cartridge and overlay.