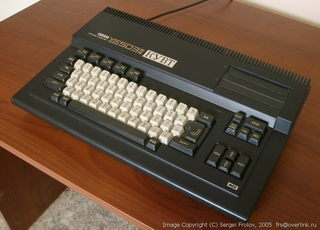 The MSX was a peculiar system that straddled the border between consoles and home computers. It was the brainchild of Kazuhiko Nishi, then Microsoft's Vice-President for the Far Eastern operations and chief executive of Microsoft Japan. It was inspired in part by the success of the VHS standard and intended to popularize home computers in Japan.

Nishi first conceived the standardized home computer when he observed VHS's impact on the Japanese economy, and believed that the same could be achieved in the computer market. Together with ASCII Corporation, the major Japanese publishing house specializing in computer literature and software, he founded the MSX consortium to develop a standard 8-bit computer specification. It was based on popular and inexpensive off-the-shelf components, and released to the public in 1983. Any manufacturer could build a computer based on it. In fact, Nishi attempted to do the same thing in the home computer market that Don Estridge did two years before with the IBM Personal Computer, and, arguably, some of his design decisions made more sense than Estridge's.

The MSX offered a powerful (for the time) 8-bit system using the Z80 CPU and Texas Instruments' TMS9918 GPU. Most MSX systems offered 64K of the main memory from the outset, at a time when the first series of the ZX Spectrum had only 16K, and it could provide arcade-quality graphics at the fraction of the cost. It was often called the best Z80-based system of all time. It also had not one, but two cartridge slots connecting to the system bus, allowing for system expandability and avoiding the cheap but cumbersome and unreliable cassette tape distribution system.

Later generations of the standard improved the machine's capabilities even more and with Sony and Yamaha getting involved in the technical development, it acquired more and more features of a business machine. In the most popular revision of the standard, MSX2 (1987), 3.5" floppies became the standard equipment, video was upgraded by the installation of Yamaha 9938/9958 GPUs (successors to the original 9918), most machines had at least 128K RAM, and Microsoft supplied its latest versions of BASIC and DOS. Most of the MSX machines produced were MSX2s, and major Japanese and Korean hardware manufacturers like Sony, Yamaha, Toshiba, Samsung, and Panasonic produced, in all, about 5 million of the machines in all versions.

In Japan, the MSX was the gaming home computer of the '80s (the later Sharp X68000 being the only true competition to the MSX, ultimately displacing it for a time; NEC's PC-88 and later on the PC-98 were more business oriented). Sony and Casio discontinued their unsuccessful SMC-777 and PV-2000 computers in favor of ones based on the MSX standard; Sega vainly tried to establish the SC-3000 (a variant of their SG-1000) as a competing, technically comparable standard, but their system failed and many of its games would also be released on the MSX. Top-flight software houses like Konami, Hudson Soft, Compile, Falcom and HAL Laboratory contributed hugely to its success. Indeed, Konami's home division developed solely for the MSX for a few years after their brief turn as an Atari 2600 developer. Nintendo similarly opened up HAL expressly for Satoru Iwata (President of Nintendo from 2002 until his death in 2015) and his friends to compete in the PC market under another name, in case the Famicom/NES flopped; It didn't — HAL Labs also ended up doing plenty of NES games as well and is a firm Nintendo second-party developer to this day.

Unfortunately, the computer never took off in the US or UK, where the Commodore 64 and later the NES (in the US) and ZX Spectrum and Master System (in Europe) would dominate. This is largely because Japanese manufacturers were wary of the intensely competitive Western market and were content with the huge domestic demand (in fact, Japan already had it's on competitive market to contend with). The fact that the UK gaming and home computing community immediately developed immense animosity to the platform, which was seen as a threat to such British establishments as the Speccy and BBC Micro, didn't help either.

It, however, found a notable success in some European countries like The Netherlands, Spain, France and Finland, as well as some South American countries like Chile and Brazil, even being marketed in the last country as an inexpensive business computer: most Brazilian businesses couldn't afford significantly more powerful but extremely expensive PCs due to the ludicrous import tax (or the outright ban) imposed on the foreign computers by the military dictatorship of the time, as per their "Market Reserve" policy. There was a loophole, however: under this policy, the MSX was considered a video game console, not a personal computer, so it was exempt from the computer taxes, making it the most powerful affordable machine available.

Also, the Soviet Union started a high school informatics program in 1985 and — as domestic industry couldn't satisfy the demand — struck a pretty lucrative deal with Yamaha, acquiring huge numbers of MSX and then MSX2 machines more or less cheaply for use in high schools. (A similar action on the UK's part jump-started the Speccy's popularity.) It didn't go on sale, but still enjoyed great popularity among the students due to its immense gaming library (oh, Metal Gear!), impeccable build quality and excellent durability — especially compared to some of the more ramshackle local designs, which often didn't survive even one school year. The same story happened in many Arabian countries where the MSX was marketed as Sakhr.

As the 80s wore on, however, updates became somewhat sluggish and the standard started to fall behind the times. Microsoft, now getting most of its revenue from the PC market and Microsoft Windows, lost interest in the project and, with ASCII concentrating on its core publishing business, it gradually became abandoned. Unfortunately, unlike the PC, with which it shared many ideas and architectural similarities, the MSX was never marketed like a business machine — a significant oversight, as Brazil's case showed, that eventually doomed the very promising system. (The PC-98 line, meanwhile, was, and it really began to show in sales around 1987-88 or so.) With its prime movers losing interest, the software manufacturers threw their complete support behind dedicated game systems and more advanced computers, and both Sony and Microsoft would later go on to make other video game systems. A few MSX games were re-released on the Wii Virtual Console service in Japan. Though MSX failed to become a global standard it was intended to be, it provided Microsoft another similar chance with Windows, which turned out to be a massive success and ensued the company's computer dominance in the post-MSX era.

The console retains significant fan-followings in places like Brazil and Japan. Most notably, three MSX fanatics were the people who created the freeware Windows game La-Mulana, which uses an MSX-like graphical style, has the main character using an MSX (and later an MSX2), and includes multiple references to (and even some imitation gameplay samples of) famous and obscure MSX/MSX2 games.

The MSX also happens to be Sony's first serious foray into the personal computing and gaming hardware market, as after abandoning its quiz console, Sony moved on to getting a MSX license and building several models of MSX computers for the Japanese market. This, along with said quiz machine, makes Sega's criticism of Sony not knowing how to make hardware even more amusing. And to make things better, Sony created the Vaio line of personal computers with Windows operating systems, which act as spiritual successors to their own MSX computers during 1980s.

Processors Its CPU was a venerable Z80A running at 3.58 MHz, pretty standard for the '80s home computer, but its standardness was a major selling point. Due to the very small hardware differences between it and the Master System, porting was a breeze.

Memory The original MSX1 standard specified a RAM amount of no less than 8K, but hardly any machine was so spartan, as memory became much cheaper in '83 than it was in the Atari 2600 heyday. A couple of budget offers had 16K, but most machines provided at least 32 or 64K, and some later releases sported even 128K.

Graphics The main power of the MSX lay in its GPU, which was one of the most powerful and sophisticated 2D graphics engines ever. It was an extremely advanced (for its time) video coprocessor, supporting not only simple tile-based graphics and sprites, like Famicom's one, but also featured a lots of graphics modes (text was actually output as a set of tiles on the graphics screen, allowing their free combination); hardware-accelerated bit copy, area fill, line draw, scrolling, etc; and even a limited overlay support in later versions.

Tropes associated with the MSX: