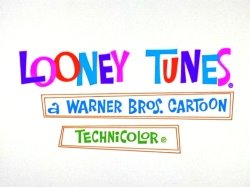 Here’s the first sign that things are about to go very, very wrong...
Advertisement:

Part four of the Looney Tunes and Merrie Melodies Filmography, covering the shorts from 1960 to 1969. A total of 147 shorts were released during this time.

As the page image here illustrates, the 1960s marked a time of change for the Looney Tunes brand, and as The Dark Age of Animation was just starting, it was not one that long time fans would very much enjoy.

The practice of including cartoons before theatrical films was starting to disappear, as cartoons began to make the mass exodus to television, and the Animation Age Ghetto started to take effect in force. This would lead to many animation studios having their budgets slashed, as there was far less money to be made in theatrical cartoon shorts. To be sure, there was a lot of quality work in this era: the Wile E. Coyote and Road Runner cartoons really hit their stride, along with some of the last great Bugs Bunny cartoons of the "classic" Looney Tunes era. But ever lower budgets meant a lot of shortcuts had to be taken, and the lush hand-painted backgrounds of previous decades would give way to flatter, more abstract designs, and character animation would become much less fluid and more formulaic, with the influence of the Avery/Clampett eras largely disappearing. On IMDB, the latest Looney Tunes cartoon to hit an 8.0 rating was Bugs Bunny's 1963 outing Transylvania 6-5000, while the 1965 Wile E./Road Runner cartoon Road Runner-a-Go-Go is the only cartoon released under DePatie-Freleng or Seven Arts to exceed a 7.0 there, possibly because it's leftovers from an unsold television pilot that eventually became To Beep or Not to Beep.

One of the things that would mark this era was the near-absence of series headliner Bugs Bunny, who would take his last bow of the classic era in 1964's False Hare. With Bugs now largely gone, Daffy would now take his frustrations on Speedy Gonzales; the lion's share of their output in this era would have them butting heads, though Sylvester briefly appeared during this time as well, as did Porky Pig in one short. Meanwhile, Wile E. Coyote continued to chase the Road Runner, most infamously in eleven cartoons directed by Rudy Larriva (plus one by Friz Freleng and two by Robert McKimson). Under the supervision of Alex Lovy, newcomers to the Looney Tunes stable would be introduced from 1967 onward, including Bunny and Claude (a Bonnie and Clyde parody with rabbits robbing banks of their carrots), Cool Cat (a beatnik tiger) and Merlin The Magic Mouse (a magician caricature of W.C. Fields.) These characters were largely disliked, and today are regarded as being emblematic of the Dork Age of Warner Bros. Animation. That didn't stop Cool Cat from appearing in The Sylvester and Tweety Mysteries, though.

The Warner Brothers animation studio was closed in 1964, but Looney Tunes animation continued as Warners subcontracted out to Friz Freleng's new studio, DePatie-Freleng Enterprises.note At the same time DePatie-Freleng was picking up Looney Tunes, they were creating the last great character of the golden age, The Pink Panther In 1967, the then-renamed Warner Bros.-Seven Arts temporarily re-opened an in-house animation studio, which operated on vastly smaller budgets and mostly made cartoons with new characters that failed to catch on. The last cartoon short with any of the established characters would be 1968's See You Later Gladiator, another Daffy/Speedy match up. Warner Brothers got out of the animated short business for good in 1969, the original theatrical cartoons unceremoniously ending with the Cool Cat film Injun Trouble.

The 1960s Warner Bros. cartoons didn't really air much on American free-to-air TV (some shorts between 1960 and 1964 have airednote though ABC's The Bugs Bunny and Tweety Show once aired the 1965 short "Corn on the Cop" and some of the Rudy Larriva- and Robert McKimson-directed Road Runner and Wile E. Coyote cartoons, but, compared to the popular shorts between 1948 and 1959, it was rare). However, Nickelodeon's daytime version of Looney Tunes on Nicknote their Nick-at-Nite version was more known for airing 1930s black and white cartoons starring the early, non-descript Warner Bros. characters like Bosko and Buddy was home to a lot of 1960s Warner Bros. shorts, both from the twilight of the Golden Age and the post-1964 Dork Age shorts (barring 1969's "Injun Trouble", even though Nickelodeon did have legal permission to air it since it was in their broadcast library. They just didn't, due to Standards and Practices). In fact, for anyone who grew up watching Nickelodeon in the 1990s (and didn't just watch the Nicktoons or the live-action shows), they will remember that Looney Tunes on Nickelodeon aired a lot of the much-loathed Daffy Duck/Speedy Gonzales shorts (and, on occasion, the failed new character shorts, like "Bunny and Claude: We Rob Carrot Patches", the Cool Cat cartoons that weren't "Injun Trouble", and "Chimp and Zee"). The Daffy/Speedy cartoons also aired on CBS in the 1970s and 1980s, though, compared to Nickelodeon's version, the CBS versions edited a lot of comic violence involving electrocutions and explosions.

Though the classic stable of characters would continue to reappear in coming decades, it's largely agreed that they have yet to once again match the dizzying quality they had in the 1940s and '50s (mostly due to the original directors and crew members dying and the fact that time and society has marched on and what one generation found funny will fall flat or be deemed as backwards and insensitive to the next).