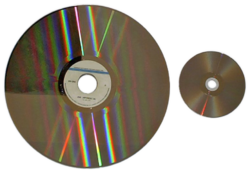 A LaserDisc (left) compared to a DVD (right).
"This looks like a silver record. But it's not a silver record, it's a LaserDisc! There's a movie on there, heh."
— Mark, SLC Punk!

LaserDisc (originally a trademarked term invented by Pioneer Electronics) is an optical recording medium primarily used for video recordings. In fact it was the first optical recording device to be made publicly available. The technology first began development in The '50s; however, it didn't debut until 1978. The disc resembled a Compact Disc the size of a vinyl record album. The similar appearance is because it was a precursor to CD.

The format originally didn't have a proper name. It was called many different things, but was first marketed as MCA DiscoVision (or simply "DiscoVision"), with MCAnote The owner at the time of Universal Pictures and Dutch electronics company Philips having significantly contributed to the development of the format. Moreover, Jaws was the first movie to be released on it. In 1980, Pioneer Electronics bought out the rights and patents to the format, and subsequently renamed it "LaserVision", with the format introduced in Japan in 1981. Although they would later use "LaserDisc"note This specific spelling as a brand name, LaserVision was the official name of the format until the early 1990s, when Pioneer finally began to use "LaserDisc" as the format's official name.

Despite superior sound and picture quality LaserDisc never caught on like VHS, but had a 5% market share until it was phased out completely by DVD in the year 2000. It was more popular in Japan with 10% of households owning a LaserDisc player (which weren't discontinued until 2009). It was also popular in wealthier East Asian regions, including Singapore and Hong Kong. Its popularity there was mainly due to the humidity in that part of the world causing mold to grow on magnetic tape, while optical media didn't have that problem. The LaserDisc's quality came with some flaws. Storage capacity was quite low, and depending on the format would range from 30 to 60 minutes per side. Any movie that was over two hours would require multiple discs. The size of the disc also required a fairly noisy mechanism. In addition, the type of glue used to attach the two sides together was known to rot away, exposing the reflective layer inside and causing it to oxidize away, slowly turning the discs black and affecting playback and picture quality (this was called "laser rot" back in the day, and became more commonly known as "disc rot" after it was discovered to be possible in later optical disc formats as well). Perhaps more importantly, in the days before Tivo and other DVR devices, the LaserDisc couldn't tape your favorite shows.note Recordable, and even rewritable, LaserDiscs did in fact exist

, but were marketed towards professionals and never achieved any significant penetration into the consumer market. This in addition to the fact that they were ungodly expensive and unaffordable to most people. Plus they can only record once like a DVD, assuming you're not thinking of DVD-RAM. That plus a steeper retail price for both the player and discs gave the VHS a decisive advantage. That said, in the '80s, the discs were significantly cheaper to buy than VHS tapes, which were largely intended for the rental market, which made LaserDisc popular with collectors. In the heyday of the medium the difference in quality between LD and VHS was significant enough that when LD aficionados bought a new disc, they would sometimes invite their (non-LD-owning) friends over to watch it at a "LaserDisc party" (as seen in a third-season Friends episode). Dropping prices for VHS tapes eroded LD's advantage when Hollywood began to focus on video sales and studios targeted LaserDiscs for expensive Limited Special Collectors Ultimate Editions aimed at film buffs. Said film buffs also enjoyed the fact that letterboxed versions of almost every filmnote Only films shot natively in widescreen. That's a little over half the movies from The '50s and nearly every movie since then were available on LaserDisc in The '90s, thus preserving the widescreen frame the director intended to present. Unlike VHS and Beta releases where Pan and Scan was everywhere and letterbox was rare.

With the exception of the Japanese Hi-Vision discs (which could only play on selected players from the same region and required a matching television set), LaserDisc was an uncompressed medium. If the disc was made from good master copies, this means that it had a better image than many DVDs (especially early ones), and will almost always have theater-grade sound quality. (DVDs by default use a lossy compression scheme, and often have inferior soundmixes designed for the home.) LaserDisc data could be burned onto the disc in two different ways, Constant Angular Velocity (CAV) and Constant Linear Velocity (CLV). On CAV discsnote Which have 30 minutes per side, and are also known as "standard play"., once around the disc was one frame of image. The advantage of CAV was that freeze-framing, scanning forward and backward, etc., could be done by a simple mechanical variation of the motor speed. The disadvantage was that it wasted space; the data recorded towards the outside of the disc was spread out relative to the data close to the center. CLV discsnote Which have 60 minutes per side. Also known as "extended play", these are the discs used for most movies., by contrast, wasted no space, but showing the picture while pausing, fast-forwarding, and such required mildly complicated math on the fly. Cheap LaserDisc players couldn't do it. Those that could were referred to as having "the chip". Note that one physical disc could have CLV data on one side and CAV data on the other. The Fugitive has the first side encoded CAV, and the other two sides are CLV. Thus, if you had a cheap LD player, you could freeze-frame the movie only on the first side.

The LaserDisc format also "pioneered" the practice of supplementing films with special features, such as DVD Commentary, which first appeared on The Criterion Collection LaserDisc release of King Kong (1933) in 1984. Some of these releases had extra features that can't be found anywhere else, and some are highly sought-after by collectors. The 1993 LaserDisc boxset of the original Star Wars trilogy is still sometimes said to be the best release the series has gotten, since future DVD and Blu-ray releases don't have the unaltered versions of the films or the extensive extras and giant hardcover booklet that came with the set (the masters used for the original unaltered trilogy in the 2006 DVDs as extras were sourced from these discs).

LaserDiscs are also perhaps best known among the video game community for being the format used to created well known arcade games such as Dragon's Lair and Space Ace, which pioneered the use of full motion video in video games. There was even a laserdisc-based console system called the "Halcyon", which was discontinued after only two games were released for it: Thayer's Quest and NFL Football. In the mid-1990s, Pioneer released the LaserActive, a game console that was more of a high-end all in one solution that, aside from LaserDisc-based titles, could also play Sega Genesis, Sega CD, TurboGrafx-16, and Turbografx-CD titles; however, two different modules were required to play them. While lasting longer than the Halcyon, the LaserActive was also short lived with only several games released for it in Japan and North America.

In North America, LaserDisc found more acceptance in institutional settings like schools and businesses. The ability of players to connect to computers made them a popular way to implement promotional video kiosks in stores, convention booths, or interactive museum exhibits as early examples of multimedia computing. Before personal computers had video codecs, educational multimedia programs used LaserDiscs for the video portion. An innovative use of LaserDisc was the BBC Domesday Project

, which allowed users to nagivate the streets of British cities, predating Google Street View by about 30 years.

One thing that contributed to the longevity of the LaserDisc player in Japan was that it was the preferred media for Karaoke in the country. While the west frowns upon Karaoke and many other countries in Asia switched to the more compact (albeit inferior image-wise) VideoCD format, Japan stuck to LaserDiscs until it was finally discontinued in 2009 for no other reason than being an analog format. LaserDiscs are capable of carrying two distinct audio tracks: an analog stereo track and a digital stream which can pretty much be used for any type of audio. In the west, this was usually used for 5.1 Dolby Surround on premium releases and sometimes Spanish SAP or Descriptive Video Service (DVS) in stereo PCM, but in Japan, Karaoke discs used them as PCM stereo tracks that carried a minus-one version of the song to be sung along to. The ability to store PCM audio tracks also allowed for the creation of "CD Video" discs in the west that either featured a full-length movie with a digital audio track or combined a CD single in Redbook audio with a small analog video track featuring either a music video or an excerpt from a concert recording. While ambitious, the format only lasted four years due to its inability to find a clear audience; more on that can be found on the Compact Disc's own page.

The LaserDisc's popularity in Japan meant that it was the preferred home video format for anime, especially OVAs. This carried over to anime's nascent popularity in the West in the '80s and '90s. A lot of localized anime was released in the format, and the U.S. and Japan using the same NTSC TV system meant that dedicated fans could import Japanese discs and watch them without a converter, provided they were proficient in the Japanese language. LaserDisc's ability to create clean freeze frames that low-end VHS machines lacked also allowed screen captures to circulate around the early internet. This feature also became an invaluable asset for early fansubbing groups: because editing on videotape, even for something as simple as adding captions, had to be done frame-by-frame, the clean freeze-frames provided by LaserDisc players made it easy to cue up each shot, with the lack of surface degradation on LaserDiscs making it easy to re-use the same disc again and again without worrying about losing picture quality along the way (provided that laser rot hadn't set in yet). What's more, the high video quality on LaserDisc releases heavily minimized the amount of generation loss sustained on the final, fansubbed VHS tape, allowing for much sharper-looking releases than tape-to-tape edits. While the writing quality of said subs... varied, to say the least... the fact that they were around at all is hugely indebted towards the flexibility LaserDisc players gave to amateur video editors.

Aside from that there were also High Definition LaserDisc players in Japan starting in the early 90s. These "Hi-Vision" discs carried 1035i video compressed in the MUSE format (a Japanese analog HD compression scheme) along with the usual 5.1 Digital Dolby Surround track and Stereo Analog track. However they required a Hi-Vision capable player, and the monitor, projector or TV must also be Hi-Vision compatible and capable of decoding the MUSE signal, although the option to purchase an external decoder that decodes Hi-Vision to 1080i component video does exist later in the format’s lifeline. A MUSE capable display paired with a 5.1 kit was considered to be the ultimate in home cinema experience of the time, and would be perfect if it wasn't for the fact that one had to get up and change the disc every hour or so, two hours or so if you own an uber-expensive auto-reverse Hi-Vision player.