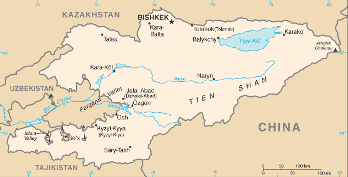 Kyrgyzstan (Kyrgyz: Кыргызстан, Qırğızstan), officially known as Kyrgyz Republic (Kyrgyz: Кыргыз Республикасы, Qırğız Respublikasy; Russian: Кыргызская Республика, Kirgizskaya Respublika) and also called Kirghizia, is a Central Asian country bordered by Kazakhstan in the North, China in the east, Uzbekistan and Tajikistan in the west and south. It was formerly a part of the Soviet Union.
Advertisement:

Early Chinese and Muslim sources state that the early Kyrgyz were red-haired and blond. Today, most Kyrgyz are of mixed Eurasian descent, although East Asian features seem to dominate.

Due to its location along the backbones of the high Pamir and Tian Shan mountain ranges, ancient empires who conquered the region were mainly nomadic in nature; the Xiongnu, the Scythians, the Xianbei, the Hephthalites, and the Rourans were among the famous examples. The Turkic imprint of the land was marked in the 6th century, when the Rourans were toppled by the Turkic Khaganate, who ruled most of Central Asia. However, the ancestors of the Kyrgyz, known as the Yenisei Kyrgyz, were still living in Mongolia and Siberia by this time.

When the Uyghurs took control of the Khaganate in the 8th century, the Kyrgyz began to emigrate to the conquered areas, partly due to the increasing pressure from the Mongols. From this time, two lines of the Kyrgyz branched off. Those who remained behind inherited the language and faith of their Yenisei forefathers. A small community of them still exists in China's Xinjiang and Manchuria. Meanwhile, the numerically larger emigrants crossed paths with two unrelated Turkic confederations: the Cuman-Kipchaks in the northwest and the Karluk Kara-Khanids in the southwest. From the former, they adopted their language, while from the latter, they adopted Islam.

In their new land, the Kyrgyz were mostly subservient to peoples who claimed the area. They were under control of the Qara Khitai in the 12th century, then the Mongols in the 13th century, the Chagatai from the 13th to the 17th century, and the Oirats until the 18th century. The Black Death, which devastated Europe in the 14th century, is believed to have originated from Lake Issy-Kul in the northeast of the country, with the lake being a stopover on The Silk Road and medieval merchants unknowingly carrying infested vermin from the region along with them.

Tsarist Russia expanded to Kyrgyzstan during the 19th century, taking the land from Qing China. Revolts during the Russian Revolution by the native Kyrgyz only ended in failure, and they were incorporated to the USSR, getting SSR status in 1936. The Kyrgyz were often lumped together with the Kazakhs, the word Kara-Kyrgyz was used to the actual Kyrgyz.

While industrialization in the country merited some successes, the country was swept away by the events of the fall of the Soviet Union. Kyrgyzstan later declared independence in 1991.

Kyrgyzstan's politics since then have been pretty tumultuous. Since independence, the country has experienced no less than three revolutions. The first occurred in 2005, deposing the country's first president, Askar Akayev. He had won some praise for reforming parts of the economy through his technocratic credentials, but he increasingly became autocratic. Not to mention the claims that he is a descendant of a medieval Kyrgyz hero and the rumors that Boris Yeltsin of Russia had played drums on his balding head while drunk. The second revolution flared up in 2010, when protesters accused then-President Kurmanbek Bakiyev of ending up like Akayev. He was sacked from his post, and a woman named Roza Otunbayeva, a former foreign minister, led a transitional government, before Almazbek Atambayev, who served as prime minister during her presidency, took over.

The latest revolution happened in 2020, following a contested election in which allies of the incumbent President Sooronbay Jeenbekov claimed the majority vote. Opposition supporters subsequently led a massive rally, occupying government buildings and forcing the election commission to annul the election results. Jeenbekov stepped down and the newly-elected prime minister, Sadyr Japarov (whom Jeenbekov had imprisoned in 2017 for advocating nationalization of a gold mine operated by a Canadian company), assumed presidency until a repeat election was held in January 2021. Japarov won the election in a landslide.

Though the transition was chaotic, three revolutions had nevertheless managed to bring the country from the post-communist authoritarian mentality that plagues most of the former Eastern Bloc. According to analysts, it is the only Central Asian country that can genuinely be called a democracy (albeit a seriously flawed one).

Other than political issues, Kyrgyzstan also deals with a poor economic record, as the fall of communism dealt a huge blow to its industrial sector, while agriculture remains the major occupation of the population. It just barely qualifies as a lower-middle income country according to the World Bank and ranks among the poorest ex-Soviet states, right above Tajikistan. In addition, it has a history of ugly race riots, particularly between its Kyrgyz majority and Uzbek minority. 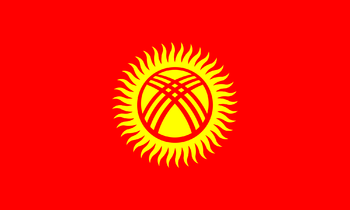 The red field symbolizes valor. At the center is a golden sun, representing bounty; at its center is the tündük (stylized as a red ring and two sets of three lines), the crown of a yurt, symbolizing the family; and its 40 rays recall the Epic of Manas

, in which the titular hero consolidates 40 Kyrgyz tribes against the Mongols.
Emblem of Kyrgyzstan 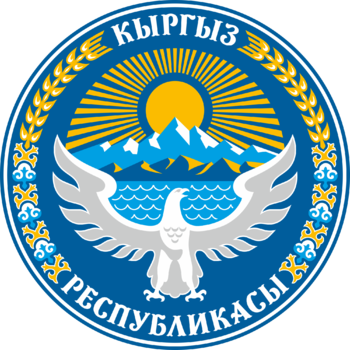