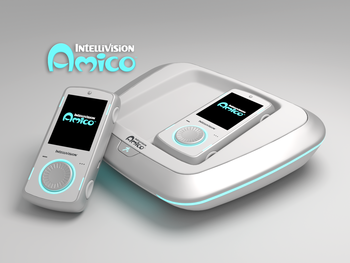 The Intellivision Amico is an upcoming video game console, under the Intellivision brand. The project is spearheaded by industry veteran Tommy Tallarico. Its release date is currently unknown, especially after an SEC filing in early 2022 which showed that the company would be unable to operate beyond July of that year.
Advertisement:

The console will have a strong focus on family and retro-flavored entertainment, with remakes and Updated Rereleases of classic Intellivision, Atari, and arcade games making up a good chunk of its library. Notably, it will primarily be a 2D and 2½D console, mostly eschewing the 3D gameplay that has dominated the industry since The Fifth Generation of Console Video Games. According to Tallarico, the Amico aims to return to simple, traditional family gaming and "couch co-op" multiplayer, which he feels have been lost in the current online-focused industry climate.