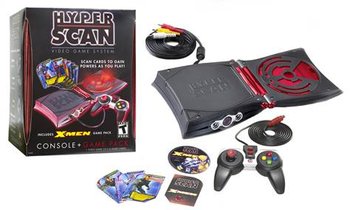 A broken predecessor to Skylanders.
The HyperScan was a video game console released in 2006 by Mattel. The system made use of an RFID scanner which was able to scan cards used by the player. These cards could load or save game data, power up characters, or do other things. The system itself was aimed at boys from 5-9 years of age, even though the games released for it all had ESRB ratings of "T". The system was notably very poor - much like Mattel's previous foray in the video game industry, the Intellivision. Only five games came out for it and the system, games, and card packs barely sold.
Advertisement:

However, the HyperScan does have some firsts to its name: It pioneered NFC as a gameplay mechanic five years before Activision spawned the Toys-To-Life Game genre by successfully bringing the same mechanic into the mainstream with the Skylanders series, and it was the first console with a NFC reader built in six years before Nintendo's Wii U and corresponding amiibo line.

Manufacturing and support for the console was discontinued just one year after launch, with Mattel once again leaving the console market in 2007.

This console and its games contain examples of: