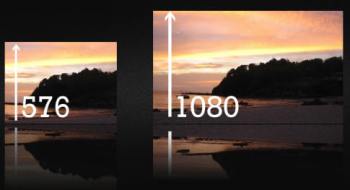 The same image at standard definition and high definition.

High Definition Television is a video format containing more resolution than the 625 lines of PAL or 525 of NTSC used by Standard Definition video. Analog broadcasts in HD go back to the 1950snote But were not commercialized in most countries partially due to technicalities that made it impossible to co-exist with existing Standard Definition signals, and partially due to limitations of the technology- a CRT with a mask that was fine enough to display HD properly was expensive to produce, and the circuitry would not only be massive that it would consume a lot of space, but would also generate a lot of heat and consume a lot of power. Only France and Monaco had what is technically a working HDTV system (819 lines), but it was in black and white, and the way it used bandwidth was very proprietary and incompatible with channel plans used elsewhere, thus causing interference issues at border towns of countries who're using more standard channel plans. And on top of it all, as mentioned above their TV sets were expensive, large and bulky. Decision was made to abandon the system in favor of standard definition TV when color television was introduced in those countries in the 80s, but did not take off in most of the world until the 2000s. note Japan introduced HD in 1988 and most households had HD capable TVs since the mid-early 90s, but they were an outlier in this regard. Furthermore, computer users with VGA monitors have effectively had HD since the late 1990s. The transition to high definition also brought an Aspect Ratio change to television, making 16:9 the new default.

These three resolutions are generally regarded as HD:

Broadcasters tend to choose between 720p and 1080i depending on their type of programming; for instance ABC, Fox and ESPN go with 720p to reduce image blur during fast motion in sporting events and films, and to address bandwidth concerns. 1080i broadcasters such as NBC, CBS, the Discovery, A&E/Lifetime networks and HGTV/Food Network go for image clarity. However in many cases the average consumer has no need to understand either format, as they all provide a great picture. 720p sets are cheaper than 1080i televisions, though as prices go down, 720p sets are becoming fewer and fewer. 1080p is mainly a media resolution utilized by camcorders, video games, streaming services like Netflix and Blu-ray as it is not currently possible to broadcast a 1080p signal over the air.

Almost all content recorded after 2009 on major networks is in high definition, and when Fox de facto ended their Saturday morning infomercial block for new edutainment in most markets, it meant that outside of one (usually ignored) exception, all the major American and Canadian broadcast networks are now solely run in HD. The few shows that were behind the times, such as America's Next Top Model and Big Brother, had varying reasons, such as probable unease by Tyra Banks over the format, and in the case of Big Brother the high cost of refitting the set's collection of voyeuristic cameras with the HD variety. ANTM finally at least pulled the trigger in March 2012, but most of their setup remained "enhanced definition widescreen" for a long time, which is marketing code for "not really HD". Big Brother pulled the HD trigger in 2014, but not because of laziness; the complicated retrofitting of the entire show to run HD took three years to complete, and the producers wanted it all-HD or none at all. Let's Make a Deal was be the final network program to make the switch with the 2014 season start.

The turning point for switching most programs in syndication to HD was the 2011-12 season (one show, Swift Justice with Jackie Glass, downgraded to SD because of the loss of Nancy Grace and a new studio in that season, and was swiftly canceled). The trifecta of NBCUniversal's trash talk shows (Jerry Springer, Steve Wilkos and Maury) and others of its ilk, along with most of the low-tier court shows, stood out for a long time as being stuck in SD, mainly because the sketchy lawyer ads airing on those shows don't really pay the HD upgrade bill well. Again in 2012-13 however, all of those programs upgraded to 480p widescreen, good enough to fill the screen at the very least, and all of them eventually switched to HD cameras when the budget allowed them to do so. As of the fall of 2017, The Robert Irvine Show on The CW finally scrounged up the change between their couch cushions and bought HD cameras, finally ending the standard definition age on American broadcast television (though the network and affiliates rarely promote that show at all as it's mainly a contractual thanks to its largest station group, Tribune). The last true SD "full frame" show in all of syndication, the morning business review First Business, ended in December 2014, but more because of local morning newscasts stealing their timeslots than any technological issues.

The ultimate resolution, which is drooled over by home theater buffs as it's the exact size of a 'frame' of a digital theatrical film, has a width of 4096 pixels and a varying height between 2200-3100 pixels depending on film aspect ratio standard; this is known as "4K". "4K" is named after the approximate width in pixels, while 720 and 1080 are named after the height, hence, 4K is roughly twice as big in each dimension as 1080, not four times. Amazon Studios has required several of their movies and big name shows to record in 4K, including The Man in the High Castle, Transparent, and The Grand Tour.

Shows recorded on film that were broadcast before the HD-era can be remastered as long as the original film negatives are intact. This has been done with works such as Star Trek, which saw an acclaimed re-release in the format in both syndication and on Blu-ray. This sometimes causes gaffes such as If You Can Read This, which happens when writing that was never meant to be read in the old days becomes legible in HD.

Japan pioneered the adoption of High-Definition TV. The system used in Japan, "Hi-Vision" (technical name MUSE), began development in 1979 and was adopted as early as 1988 by NHK. The system uses an analog compression algorithm with some clever tricks like motion compensation to reduce blurring and keep frame rates consistent, and it was initially anything but bandwidth-friendly- initially, the signal could only be delivered via satellite as the system consumed a whopping 20MHz per channel (comparatively, a typical UHF channel consumes 7-8MHz). Nonetheless the system was a success in Japan and by the early 90s, many Japanese households had BSnote Broadcast Satellite-friendly TVs that received MUSE high-definition signals direct from satellite. Additionally, DVHS recorders (marketed as W-VHS to indicate that they're capable of recording MUSE signal) that could record (via a BS source) and play back MUSE signal and MUSE-capable LaserDisc players were also developed for the market.

The US investigated the standard but ultimately decided not to adopt itnote the FCC mandated that modifications be made to the codec so that it could fit within the 6MHz bandwidth limitations of VHF- which American engineers claimed wasn't possible without serious frame rate and image quality issues, while the Europeans attempted to create their own system, called HD-MAC. This attempt failed, partially due to the same reason as the US and partially because they refused to modify the 60Hz system to work at 50Hz, preferring to build a new system that worked at 50Hz from ground up. Ironically, a stream of improvements to the system later made it possible to transmit MUSE signal over a 6MHz bandwidth by the late 90s, which American engineers claimed to be impossible to pull off without severe frame rate and picture quality issues (again, the Japanese employed heavy use of motion compensation and employed analog encoding tricks which the US engineers had failed to consider, like for example encapsulating the entire image stream as an FM signal). The standard was later expanded to carry Dolby Digital Surround audio- years before the rest of the world had even heard of the term high definition. Japan eventually abandoned MUSE for the digital ISDB broadcast system, which had been developed with HD support in mind from the start.

Some persons believe that it was the French who pioneered HDTV with their "System E" transmission standard, which broadcasted a 819i over a 14MHz bandwidth on VHF from the 50s through the 80s in France and Monaco. This spawned a modified "System F" that uses half the bandwidth which was deployed in Luxembourg. However, the systems were black and white only (notice how they're not prefixed with the word "SECAM" in many technical documentations), and in the case of System F, had noticeably bad vertical resolution due to the available bandwidth being cut in half. The systems were dropped when these countries finally switched to color broadcasts completely.

Many 8-bit and 16-bit standard resolution era gaming consoles opted to abuse the vertical retrace pulse to create a pseudo- progressive scan mode, meaning they drew only on one field but, that field was refreshed twice as fast. This consequently resulted in the "scanlines" effect as consoles drew exclusively to the odd field and left the even field empty. By the time the 32-bit consoles came about, consoles started taking advantage of the interlacing to generate higher resolution images at the cost of losing half the frame rate, but games could choose to stick with the pseudo- progressive scan mode to maximize frame rate at the cost of resolution.

The PlayStation 2 and Xbox both supported HD, but very few games used those modes. The PS2 only had two games that supported 1080i (Gran Turismo 4 and Tourist Trophy, which both ran on the same Game Engine). The HDTV Arcade Game Database

highlights games that support the 720p and 1080i modes. Homebrew for either platform will be more likely to leverage the higher resolution. Most (but not all) games among all four sixth-gen consoles support 480p, at the very least.

Of The Seventh Generation of Console Video Games (the PlayStation 3, Xbox 360, and Wii), only the Wii doesn't have HD capabilities. This has the side effect of making text on some PS3 and 360 games illegible on non-HD TVs (since the game programmers expected them to be played on widescreen HD sets), a problem not present in the Wii due to the aforementioned lack of HD.

All eighth-generation Wii U (and ninth generation Nintendo Switch), Xbox One and PlayStation 4 are in HD, with the latter two extending to 4K. Later, the release of the Xbox One S allowed for 4K Blu-ray and streaming video playback for Microsoft's consoles.

For the sake of clarity, the following are what the various video forms are defined as.

Marketing terminology has shifted from the number of vertical lines (e.g. 720 or 1080) to the approximate horizontal resolution (e.g. 4K and 8K).

The Other Wiki has a much more comprehensive list for your liking. Here are just a few examples.