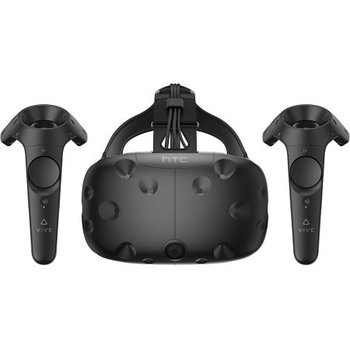 The HTC Vive is a Virtual Reality headset and Dueling Products with the Oculus Rift. The Vive was the first commercial VR platform to make use of Room Scale VR technology. While the earliest VR headsets only allowed you to move in virtual space with the use of a controller, the Vive was designed for the user to physically walk, turn, and flail around freely within a real space - preferably, a square about 3m to a side. It was also the first platform to use wireless tracked controllers to emulate the user's hands in virtual space.

The HTC Vive was developed by HTC with technology by Valve Software. Prototypes of a Valve-produced virtual reality system were demonstrated during 2014, and in 2015 Valve announced "Steam VR" - an add-on to Steam to enable VR games and programs on the Steam platform. The HTC Vive itself was officially released in 2016, and continues to be marketed to Steam users.

The initial price of the HTC Vive headset, controllers, and base stations was $799 - pricier than the Oculus Rift, but with (at the time) unique Room Scale features. The Oculus Rift would later develop its own tracked controller - the Oculus Touch - along with Room Scale enabled by adding an extra Constellation sensor to the base Oculus package. This has kicked off an ongoing feature-development arms race between Oculus and HTC.

In 2018, HTC unveiled the HTC Vive Pro - an upgraded version of the Vive headset with higher resolution, a redesigned headstrap for better comfort and balance, and integrated headphones. The price of this headset - by itself - was $799. Throwing in new base stations and controllers brought the price up to $1,399. This version of the Vive is marketed more to commercial users, as opposed to home consumers. In addition to visual improvements, the Vive Pro comes with upgraded base stations that allow for a much larger play area - a square about 6m to a side. You can also use more of the upgraded base stations for better tracking and less occlusion. Later the same year, HTC also released a wireless adapter - for an additional $299, you could replace the the cables that normally connect the Vive or Vive Pro headsets to a PC with some hardware that would wirelessly transmit information between a dongle on top of the headset and a chip slotted into the PC's motherboard.

Today, a new (basic) HTC Vive costs $499, this includes the headset, two controllers, and the tracking stations for room scale.