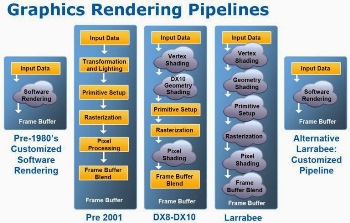 Graphics rendering is the process of composing the images that a player sees on the screen while playing a game. Quite a few tasks are needed to produce even a simple graphical game like Super Mario Bros. to a more modern game like Gears of War or Modern Warfare. Since 2D and 3D drawing methods are entirely different, they'll be covered in different sections.

2D graphics can be summed up in two different methods: Raster graphics and Vector graphics.

Raster graphics is a very common method and involves drawing elements on the screen pixel by pixel based on what's in some memory buffer.

Initially there were only two major methods of raster graphics: a text mode and direct drawing. In the former, the video processing chip had a table of characters in ROM that it knew how to draw. Thus rendering something was looking up values in this table and drawing them. As it was higher resolution than direct drawing, sometimes special characters were put in the table to allow for basic tiling graphics, though this was a hack job at best and smooth motion was practically impossible. In direct drawing, it started off as requiring the software to draw the pixel in the image when the display was just about to draw it. Later, when memory was more affordable, each pixel was drawn in that memory before it was sent to the display.

2D consoles in the later 8-bit era started taking a hybrid approach to rendering graphics. The screen was divided up into layers that were static with simple animations and meant to be the foreground and background of the view, while sprites were meant for interactive objects that had complex animations. Everything was built up from tiles on a fixed grid from a tilemap, similar to text mode, in order to make it easier on memory requirements. As hardware got better, layers could be blended together for transparency effects.

One limitation in all 2D consoles was how many sprites the video processor could handle at once per horizontal line. If there were too many, sprites could simply be dropped and those would be rendered invisible. The Atari VCS, Colecovision, NES, and many other early consoles had a quirk to try and avoid some sprites being dropped all the time by rotating through which sprites got to be displayed and which didn't, which resulted in flickering (most famously in the Atari VCS’s version of Pac-Man).

Today 2D raster graphics directly draw on the screen. Elements are typically pulled from a picture map that contains known sizes of certain elements. The difference between this and tiled 2D is that each element can now be placed on the pixel level rather from a grid position that may have, for example, a 4x4 pixel area and that the elements can be any arbitrary size.

Vector graphics on the other hand is a mathematical approach. Everything is rendered on the fly using points and lines that connect them. The first games to use vector graphics were Atari's Asteroids and Battlezone. The Vectrex was also a console based on vector graphics. Early vector graphics were simply wireframes of the model or image being rendered, hence there was a lack of color and features other than the outline. Eventually the spaces could be filled as hardware got more powerful.

The advantage of vector graphics is its infinite scalability. Because everything is created on the fly, a low resolution vector image will look just as good as a high definition one. Whereas if you scaled a low resolution raster graphics, you would get a blurry or pixelated high resolution one, often with ugly results (though there are AI based upscaling algorithms that do a really good job at preserving detail). Its major downside is it's more computationally expensive to render an image this way, since everything has to be calculated rather than plucked from a table. To put it in another way, raster graphics is like putting together a clip-art scene while vector graphics requires the artist to draw everything in.

Much like 2D Graphics rendering, 3D has two main methods.

Voxel is a portmanteau of volumetric and pixel, or more precisely, volumetric picture element. In a 3D space, this would be the most basic element, akin to a pixel being the smallest element in a picture. In fact, a voxel model is basically like how raster graphics work. It's an old concept and is still relatively unused due to hardware constraints (See disadvantages).

Voxels are advantageous for a few reasons:

However, there's still a few things to overcome:

are currently the only known voxel based graphical engines with potential for games. Other games used voxel based technology for certain elements. Minecraft uses voxels for map data, Command & Conquer: Tiberian Sun uses them for vehicles.

Much like 2D vector graphics, polygonal 3D graphics go for an mathematical approach to represent the object. The polygons themselves have all the benefits of vector graphics. The other elements are typically constrained to the same as raster graphics.

Polygonal 3D graphics are comprised of the following elements:

In the early days of 3D graphics, the CPU was responsible for rendering everything, which was known as software rendering. Things didn't really take off though until they started including floating point units, which allowed for much smoother animations. As graphics hardware got more powerful, they soon started taking over parts of the rendering process. Eventually it accumulated today, where the CPU's only graphics rendering job is to create display lists, which are instructions on what the GPU needs to do in order to render the scene.