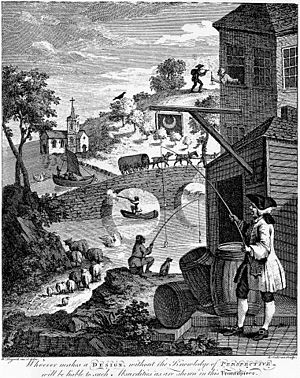 Graphical Perspective is a general term for the techniques and principles used to give an image the appearance of depth (that is to say physical depth; the artist in question is on their own as far as making their work "deep" goes) by making sure that foreshortening and sizes stay consistent based on distance. The same rules apply to all forms of rendered art (even CGI uses algorithms based on them), although that isn't to say a good artist needs to use them all the time; just that they're useful toolsnote In the same way Tropes Are Tools for writers. (and with enough practise, they can get away with "eyeballing" it anyway). The following is intended as a quick guide to how depth works in artwork (unfortunately a full drawing tutorial is beyond the remit of this wiki).

Tropes which can be drawn with or avert these techniques include:

M. C. Escher in particular was well known for using these techniques.

Most artwork is drawn using "Perspective Projection", which is based on the principle of parallel lines appearing to converge as they go off into the distance. It helps to imagine a picture's something being seen through a window by someone; let's call him Bob. Across the width of the picture is the horizon/eyeline (a line representing the point at which objects are too far away to see, which also corresponds with Bob's eye level). The height of an object relative the horizon stays the same no matter where on the picture its drawn (e.g. if Bob is looking Alice in the eyes then the horizon will pass through her eyes, and her identical twin's eyes will also be level with the horizon no matter how far away she's drawn).

open/close all folders
Linear Perspective
Linear perspective uses, as the name suggests, straight lines and covers one, two and three point perspectives. It's worth remembering that even though each one uses a different drawing technique, they're essentially drawing the same thing from different angles and ignoring the vanishing points they don't need (so 2-point is basically simplified 3-point and 1-point is simplified 2-point):

One-point perspective is the most basic form of perspective. The vanishing point is placed in the dead centre of the horizon (it is possible to put it off centre, but it tends to cause the image to become distorted without a second vanishing point) with two diagonal points evenly spaced either side. The result is an effect similar to looking down a tunnel at a flat plane.

This was among the earliest forms of perspective discovered and thus tends to be seen in the Old Masters' paintings (along with a trick of moving the vanishing point slightly to draw the viewer's eye to something important). The most famous example was Leonardo da Vinci's The Last Supper (a properly proportioned, detailed, life-sized fresco was the renaissance equivalent of a 3D movie).

Two-point perspective instead uses two vanishing points at either side of the horizon (depending on the angle, they might not even be on the page), with the diagonal being found in the middle. By using two vanishing points it allows the artist to accurately render intersecting lines (i.e. they can draw corners properly). This is usually sufficient for most situations, since it's quite flexible (for example the horizon can be placed vertically for a sort of Three Quarters View or the horizon can be raised or lowered to get a more basic version of three-point perspective).

This is the most commonly used technique for drawings and animations that need to be done to scale (most Comic Book panels will use this or shortcuts, for example). It's also most likely what a backdrop in a theatre play (or a 2D game) will be drawn with.

Finally; three-point perspective adds a "vertical horizon" (with a third vanishing point somewhere on it) above or below the horizon (usually high or low enough that it's off the page). By using this vanishing point on the picture's vertical lines (and making them look like they're trailing off into the distance) the artist can give the impression that Bob is looking up or down.

This is used for pretty much any situation where the viewing angle needs to be lower or higher (for example if the artist wants to draw a Worms Eye View or Low-Angle Empty World Shot).

Curvilinear Perspective
As mentioned above, curvilinear perspectives use arcs rather than straight lines, making the image look as if it was drawn on a curved surface. On paper, this makes the image closer to the way it appears on the back of your eyeballs, but on paper this gives the image a distorted effect that can be quite jarring. Since they're more complicated to draw than linear perspectives, many artists nowadays just draw them normally and use a computer to distort the image. While the style goes back to the writings of Leonardo da Vinci (the man clearly loved his perspective), the actual geometry behind curvilinear wasn't codified until the 70's.

Five-point perspective is the curvilinear counterpart to one-point (in that it's looking at a flat plane) and basically looks like a Fish-Eye Lens. It's achieved by having both a horizon and a vertical horizon (yep, both above and below the horizon this time - curvilinear lets you look up and down at the same time). Each horizon has a point at either end with the fifth point where they cross. The four outer points are joined by a circle (which makes the whole thing look like cross-hairs). Lines are drawn as arcs using a compass with the point placed somewhere on the horizons.

This is generally used for False Camera Effects or closeups.

Last, but certainly not least; four-point perspective is the curvilinear counterpart of two-point perspective. Unlike the other perspectives, it uses multiple vertical horizons, spaced similarly to the vanishing points on two-point (with a vanishing point at the top and bottom). It's other name, infinite-point, comes from the fact that it's also possible to add an infinite number of vertical horizons, letting an artist potentially squish an entire 360 degree vista into an image.

While it can be used for warped effects in a similar manner to five-point, it's most frequently used for wide action shots.

In graphical terms, this can be described as; rendering a perspective image with an infinite focal length. Which, in laymans terms, translates to "zooming so far out everything in the picture looks equally distant (so none of it appears to be going off into the horizon)". As a result, rather than a horizon, objects are drawn relative to the paper (the "projection plane") using three "axis" representing the three spatial dimensions. The main types are:

Orthographic projection has objects drawn perpendicular to the plane (with the vertical axis going straight up. This means that the top and front of them are visible but the sides are not. Fans of 2D gaming might know this better as the Three Quarters View.

The word "axonometric" literally means "measuring along axis". Unlike orthographic, objects are drawn at any angle but 90 degrees, meaning that the sides are visible (it's related to it in a similar way that 2-point perspective is to 1-point; in that it's what you get when you look at a corner instead of a flat surface). It can be split into three sub-types depending on the angles the axis are to each other (which corresponds to the image's foreshortening). As with perspective projection, they're essentially the same system being seen from different angles:

The simplest form of parallel projection. It's similar to orthogonal, but uses arbitrary angles for the axis. While you've probably never heard of it, if you've ever drawn a cube by drawing two overlapping squares and joining the corners...

Depth Cues and Principles
There are various things which the human brain picks up to help gauge distance. Artists can take advantage of this to help suggest depth even when they don't have time (or it wouldn't suit the style of their work) to use projection (or simply to compliment it). They include:

While air looks transparent up close, as you get further away the molecules and particles in it start to scatter light. As a result, things in the far distance tend to have duller, darker colours.

Our brains are used to dealing with objects which tend to rest on the ground. Thus (without any cues to suggest they're floating) objects which are higher up on a page appear to be closer to the horizon and thus on a more distant patch of ground.

More distant objects have less detail (indeed, averting this by giving everything the same level of detail is one of the advantages of parallel projection). Similarly, a camera's blur can be replicated to indicate that an object is at a different distance.

The former is the fact that simply having one object cover another shows it's further away. Scale is closer objects looking bigger. While perspective can be used to calculate the exact scale, simply having two similar objects of different size is enough to make one of them closer. Forced Perspective is a good example of both in action (the size of the object in the foreground makes it look close, while the fact it's in front of everything else confirms it isn't simply giant - unless it falls behind something to confirm it is, of course). This is also the reason many 2D game engines include a foreground for anything other than Video Game Interface Elements. Shadows can be used to achieve the effect with objects that aren't physically touching.

As an animation related corollary to distant objects looking smaller, they also appear to be moving shorter distances and thus slower. This scales as you'd expect (e.g. if you have two identical cars moving at the same speed and one is twice as far away it'll appear to be half the size and moving at half the speed of the closer one). The same is also true of a panning camera; objects that were behind one another will appear more offset (due to the difference in relative position).

Some Side View games will take advantage of this by having a second background layer which scrolls more slowly than the main one, to give a greater illusion of depth. On a more serious note, it is also the reason why children have to be warned that cars and trains tend to be moving much faster than they appear to be in the distance.