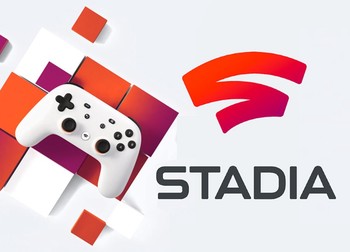 Unthink the things you think are things.
Advertisement:

For years, cloud gaming has existed as little more than a novelty. While some would find moderate success for a few years, most notably OnLive

, such services were generally held back by two things: a lack of the infrastructure for the backend, and the user's own internet connection. For cloud gaming to finally catch on and be seen as a viable alternative to dedicated hardware, you'll need a company that can supply answers to both these problems, as well as wield the money (and insanity) required to enter the video game industry with the intent of competing with "The Big Three." Naturally, at the end of the 2010s, there was only one company that satisfied all of these requirements.

is Google's entry into the gaming industry, competing with Sony's PlayStation Now and Microsoft's xCloud services. As a cloud gaming service, games played on Stadia are processed and rendered on Google's servers and sent to player's chosen device, with the players only requiring an Internet connection and their devices to support the Google Chrome browser or run ChromeOS. Any USB controller works with Stadia, though there does exist a dedicated Stadia controller that connects directly to the data center where the players' game is running, thus helping to reduce input latency.

Stadia was quickly met with skepticism by the public. Google's history of abandoning products and services that aren't instantly successful raised questions about the platform's long-term prospects, especially since breaking into the video game industry as a platform holder demands a large amount of investment. And while the technology to make cloud gaming work had vastly improved since its introduction with the launch of OnLive in 2010, it was still a largely unproven system with its own unique issues. The business model was also heavily criticized; over a decade of Netflix had conditioned people to expect any streaming service to only ask for a subscription fee, so having to buy each game piecemeal was not appreciated. Poor communication with the marketing didn't help, as many people thought the Stadia Pro subscription was mandatory to access the service on top of the need for individual purchases.

One of the biggest problems with Google Stadia is that not only it's region-locked, it's not available in Asia, Africa and the Middle East.

Google attempted to build confidence in Stadia by founding two of their own in-house development studios, collectively known as Stadia Games and Entertainment. They also hired two industry veterans — Jade Raymond (known largely for work on Assassin's Creed) and Shannon Studstill (former head of Santa Monica Studios) — and placed them in charge of the new studios. However, in February 2021, Google announced the closure of Stadia Games and Entertainment and their shift in focus to securing more third-party support for the platform. The studios were active for less than two years and were unable to release any games in that time. This put even more doubt on Stadia's viability and Google's general ambitions in the gaming market.