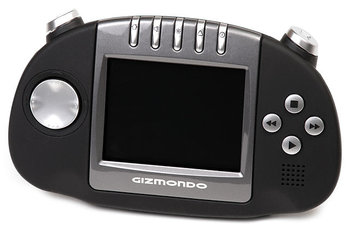 I Can Do Anything
Advertisement:

Tiger Telematics' note (no relation to Tiger Electronics) sole attempt at entering the lucrative handheld gaming market, the Gizmondo is one of the more interesting failures in video game history, lasting only 11 months on the market (March 2005 - February 2006) and boasting a parent company with a bizarre history of its own.

Tiger Telematics began life in 2000 as a Swedish electronics company called Eagle Eye Scandinavian (headed by Carl Freer) known for distributing GPS devices until it was bought out by, of all things, an American carpeting and flooring company. The merger, the brainchild of Freer's friend Stefan Erikson and meant to take advantage of the carpet company's interesting financial setup, resulted in Tiger Telematics, which had the goal of creating a child-tracking GPS device for parents. Due to both the legal grey area of such a product, and the fact that no child would keep a plain old GPS on them at all times, the company decided to adjust course in 2003. They would keep the child-tracking GPS idea, but deliver it in a more appealing form factor. Enter the Gametrac handheld game console, renamed Gizmondo by the time of its 2004 CES showing due to trademark disputes in the United Kingdom.

The handheld had potential, as it supported a variety of features which were surprisingly ahead of its time. In addition to the fully-functional GPS, the system could handle real-time 3D graphics along with 2D sprites, Bluetooth wireless support, the ability to send text messages and emails (which was still a novelty for mobile devices in general), and a 1.3 megapixel camera. There were even plans to make it capable of playing movies and music on the go. But despite all of these features and all the excitement that Tiger Telematics attempted to stir up for their entry into the market, the Gizmondo ultimately crashed and burned with both critics and consumers, for a bevy of reasons:

Needless to say, the Gizmondo was dead on arrival — it sold less than an abysmal 25,000 units, making it the second worst-selling system in video game history, and the worst selling handheld game system of all time. note The only console that has the dishonor of selling worse than it is the Pioneer Laser Active, which only sold 10,000 units worldwide Combined with an avalanche of lawsuits from sponsors, advertising agencies, and television networks over Tiger Telematics failing to hold up their financial agreements, the company found themselves with a debt of $382.5 million and forced to go into bankruptcy in January 2006. A revival attempt was planned circa 2008 by Freer under a new company called Media Power alongside a new partner, Mikael Ljungman. But this was largely overshadowed by the fact that Erikson had recently crashed a rare Ferrari Enzo after speeding against a Ford GT... leading into him being arrested on drug and illegal firearm possession charges and the discovery that he was involved in the Swedish Mafia, alongside many other weird twists. Ljungman also ended up being arrested and convicted on charges of serious fraud, separate from the Erikson situation. Alone, Freer attempted to continue towards a Gizmondo 2 (now re-envisioned as a smartphone), but any chance of the brand making any kind of comeback was now dead by 2009.

On a side note, the handheld made the top of ScrewAttack's "Top 10 Worst Video Game Busts

" list. Lazy Game Reviews has also done a video on the system