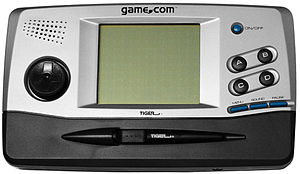 Game.com active.
"I don't believe it myself. Imagine reading your e-mail on this thing and you'd have to hook it up to a modem, so you couldn't leave your house anyway... WHY NOT JUST USE A COMPUTER!?"
—The Angry Video Game Nerd's review of the handheld.
Advertisement:

The Game.com (pronounced "game com", no "dot") was a 1997 handheld system made by Tiger Electronics, famous for making LCD games long beforehand. The system can be seen as revolutionary for its time, as it had a touch screen and rudimentary Internet functionality long before other video game companies tried their hand at it, along with other curious features like having two cartridge slots (initially). Perhaps this was for the best, as the router used to connect the game.com to the internet was a nightmare to hook up, and both the instructions that came with the system and the ones on Tiger's site were incorrect.

Unfortunately for Tiger, it was far too ahead of its time and failed to catch on with consumers, though its infamous advertising campaign insulting Tiger's potential customers certainly did not help, but that was probably the least of the Game.com's worries. While the system's CPU is theoretically on par with the Game Boy released almost a decade earlier (And a slightly bigger 200×160 screen), it was crippled by the Operating System's constant processing overhead. This meant that games ran notoriously slow, as in low single digit FPS. Its audio capabilities, while theoretically superior to the Game Boy (supporting PCM audio right out of the box as well as wavetable synthesis while the Game Boy could only do pulse synthesis), were held back by the system's slow CPU, making any music from the system sound more like a slow, atonal series of beeps and boops. What also didn't help was that the touch screen barely functioned and the internet function of the device was virtually useless for the reasons outlined in the previous paragraph. To make matters worse, the much anticipated (and technically superior) Nintendo Game Boy Color would come out the following year. Tiger would attempt to respond with a smaller budget version of the Game.com called the Game.com Pocket Pro in 1999 with an added frontlight and the second cartridge slot and internet capabilities gutted, to no avail. Tiger would discontinue the Game.com line in 2000, having sold less than 300,000 units total.

Nonetheless, it's still an interesting little nugget of video game history, and it got a decent amount of games with recognizable brand names on them (though the games themselves were rarely up to snuff).

In addition to the above, Game.com Internet and Tiger Web Link were released as part of internet-connection accessories.