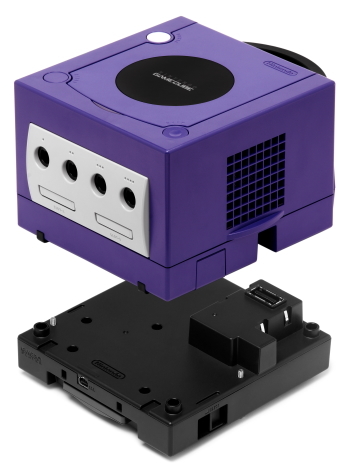 Unfortunately, the Game Boy Player wasn't as feature-packed as its predecessor, but it still had the following features:

As mentioned before, the Game Boy Player lacked features that the Super Game Boy had. You could no longer draw on the screen, game-specific borders were gone, you could no longer create custom palettes for original Game Boy games, and controller multiplayer was also gone. In addition, games with Super Game Boy-specific features will only work as regular Game Boy games, meaning the extra sounds, two-controller mode, custom palettes, and custom borders will not work on the Game Boy Player. While the Game Boy Player's clock speed also was 1:1 with a standard GBA, thus cutting out the oddity of Game Boy games running abnormally fast on a Super Game Boy, it also handled visuals more poorly thanks to it being built for a 480i display instead of 240p along with a softening filter applied to them, resulting in games looking blurrier on a Game Boy Player, and suffering from greater input lag. While the Game Boy Player did support Progressive Scan, this did little to improve the picture quality since you still had to put up with the blurring, and even Nintendo themselves admitted as much.

note Some homebrew released much later offers the ability to play the games at 240p with no image softening filter applied, so long as you're willing to go that extra mile The game display was also noticeably dark too, mainly to get the visuals more in-line with the non-backlit model 1 GBA, but the emergence of games later in the GBA's life that took advantage of the SP's frontlight meant that they'd look unusually dark on your TV (though some later GBA games like Mario vs. Donkey Kong had special display settings to optimize the picture specifically for the Game Boy Player).

The Game Boy Player also had compatibility issues with certain games listed below.

Unfortunately, this add-on would be the last of its kind, as due to the nature of the GBA's successor, the Nintendo DS, DS support on the GameCube's successor, the Nintendo Wii, would be impractical. While the Wii U with its touchpad could support a theoretical Nintendo 3DS attachment, Nintendo never released one, possibly due to the fact that they would have to eschew the 3DS's main selling point, 3D support.note However, that didn't stop Nintendo from releasing a budget 3DS model without 3D support, but around the same time, 3D had fallen out of favor with the general public anyway and Nintendo would stop putting 3D support in their later 3DS titles. Despite this, it probably wouldn't occur to Nintendo to go ahead with a 3DS add-on for the Wii U due to the commercial failure of the console and the fact that it would be late in the system's life. The Nintendo Switch meanwhile would serve as both a handheld and a home console simultaneously, thus rendering the whole point of add-ons of the Game Boy Player's nature redundant.

The Game Boy Player lives on in the hearts of GameCube and GBA fans, with the homebrew scene creating a Spiritual Successor in the form of the GB Interface, a replacement for the Game Boy Player startup disc that more faithfully translates the GBA experience to TV monitors, including the ability to play games in 240p and with a display that more accurately reflects the look of later backlit GBA models.

Sony would go on to do something similar to the Game Boy Player with the PlayStation TV, a device that could play PlayStation Vita games on a television screen with a DualShock 3 or 4, but unlike the Super Game Boy or the Game Boy Player, the PlayStation TV was its own standalone unit. The Vita's homebrew scene too later made a successor in the VitaDock, a Raspberry Pi build that apes the Switch's dock to allow the Vita to serve as both a handheld and a home console simultaneously.