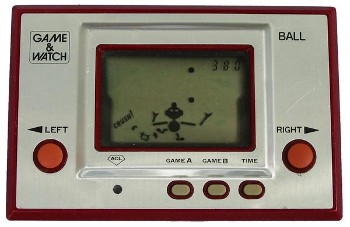 Ball, the first of the Game and Watches.
Advertisement:

When Super Smash Bros. Melee came out, there was a strange character that nobody except the most hardcore of Nintendo fans recognized. His name was Marth.

Back when Nintendo was in its early days (early for video games, at least), Gunpei Yokoi saw a business man playing with his LCD calculator on his way home. This inspired him to make a watch that doubled as a game to kill time with. Thus the Game & Watch, a watch and a game that looks slightly like a calculator, was born. It helped popularize handheld video games, started Nintendo's monopoly on handhelds, and catapulted Yokoi to a high position in Nintendo. From that position, Yokoi would create the Game Boy, Metroid, Kid Icarus, Dr. Mario, and Fire Emblem, before the... unfortunate mistake that the executives made with the Virtual Boy. In fact, the Game & Watch was Nintendo's first major success in the world of gaming (there was the long-forgotten Color TV Game home console and a few arcade games, but with one exception, nothing came out of them). Also, one of the templates for the Game & Watch was used in Nintendo DS. So, if you ever owned a handheld, you know who to thank now.

Some of the popular Game & Watch games:

For information about the series' gameplay, go here. The Game & Watch Gallery series has its own trope page.