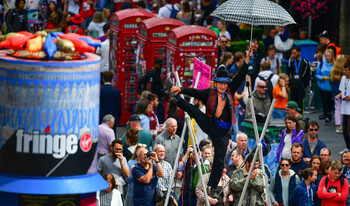 A Fringe Festival is an event that celebrates all things theatrical and low-budget. Fringe Festivals are, as Wikipedia puts it, a venue for alternative theatre and non-mainstream entertainment. They are held annually in Edinburgh, Scotland.

Okay, maybe a time limit for the show will be imposed, but that's just to allow for more plays. Fringe Festivals typically operate on at least the following principles: An un-juried entry process (the Festival will not vet the applications for quality or content), zero censorship, 100% of show revenue going directly to the artists, and an entry fee that is not prohibitively expensive.

It can vary from festival to festival (most major cities have one), but by and large, as long as you have the legal rights to perform something (and your entry fee check doesn't bounce), they'll give you the venue to do so. Given the nature of these festivals, many budding talents start their artistic careers there, and now well-known plays begin there. The Edinburgh Fringe has become an important Theatre event unto itself, with even big-name Hollywood actors making appearances in productions. In fact, the Fringe is now bigger than the Edinburgh Festival of the Arts that it's supposed to be at the fringes of.

In general Fringe productions are a little off-kilter (zero threat of censorship tends to bring this out in playwrights), but also the ideal place to showcase new and exciting talent. Since there's no real regulation as far as what can or cannot be performed, it can range from brand-new works to plays by established writers, magic shows, dramatic or comedic monologues, and even stand-up comedy.

Not to be confused with a festival for fans of the TV series by the same name.

Notable Fringe Artists (from before their fame and/or infamy):