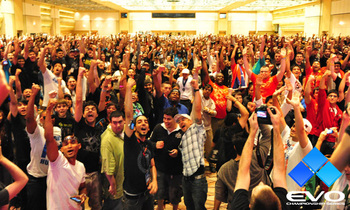 You must defeat them to stand a chance.
See also: Fighting Game and Useful Notes/Fighting Game

Tournament Play, though it has been around for a while, has only recently reached the mainstream spotlight. For some titles, such as StarCraft, the rise to prominence is truly remarkable. The rise of Major League Gaming has made strides to legitimize videogames as a sport, and it's not uncommon to see game tournaments awarding cash prizes in the upwards of tens or even hundreds of thousands of dollars.

One community which has changed significantly with the rise of e-sports is the Fighting Game Community which, while not quite as prolific as RTS games, shooters or MOBAs has a very dedicated (and long-established) following.

History of the FGC

In the beginning, there was Street Fighter II, and it was good. Street Fighter II: The World Warrior was released in 1991, and was a critical and commercial success. Though fighting games had exist before it, this game was the Genre Popularizer and the Trope Codifier for nearly everything that fighting games possess today. Players from all over showed up with full wallets at their local arcades and took turns beating the crap out of each other to prove who was better. Naturally, people began to ask the question: just who is the BEST?! And thus, the Fighting Game Community took its first steps. Years prior to the advent of YouTube, gaming competitions were extremely obscure and mostly unofficial events that were solely gamer-driven. In short, if you played the game, and you were good at it, chances were you would go to an arcade (or to someone else's house) to play against someone who was equally skilled or better. The only way to experience better competitive play was to see it and face it in person (or, if you were lucky, on recorded video). All of this began to change with the internet, starting with message boards. On various disjointed forums, players of any particular game (or sub-sect of games) could meet and compare notes with other players and mutually try to improve. This made it easier to organize gatherings and compare "technology" (gamer jargon for improved playing methods). In 2000, Shoryuken.com

(of course named after the famous Street Fighter attack) was born and became the go-to forum for Street Fighter competitors. Other fighting-game sites were also in use, such as Virtua Fighter.com and the (now-defunct) Soulcalibur.com (both of which were actually founded before SRK), but Shoryken.com in many ways became the "face" of the FGC. The creation of Shoryuken.com can be marked as the end of the "First Generation" of the Fighting Game Community and the beginning of the "Second Generation."

With this new hub, the fighting game community quickly began to pool together to create "major" tournaments that would gather the best of the best from all over the country (and the world) in order to compete with each other. The "Evolution Championship Series"

(or "Evolution 2K") was created in 2002, evolving from the previous "Battle by the Bay" tournament, and became their flagship event. In the earliest incarnations, BbtB and EVO were Street Fighter-only affairs. This quickly changed in 2003 with the addition of several additional series. About the same time, video footage of tournament events and combo exhibitions became commonplace. This footage became one of the major ways for players unfamiliar with the FGC to become "hype" for these events; either after watching other players better than them perform amazing feats, or after watching and deciding that they could do better themselves. Many players cite finding "Evo Moment #37", the famous Daigo Umehara parry against Justin Wong, as what introduced them to competitive play. This only grew more pronounced as YouTube began taking off in popularity, with more and more FGC content ready and available for viewing by any interested parties. However, in the middle of the 00s, the FGC began slowly fading in popularity. There are many factors which have been blamed, but all had a hand to play in it. The dwindling arcade market, the increasing complexity and thus bar of skill required for new players, the (alleged) unfriendliness of experienced players toward newbies, and ultimately, the dwindling of fighting game sales and their subsequent lack of profitability. Of the aforementioned problems, some are subjective, but all created a particularly vicious circle informally referred to as "The Dark Age of Fighting Games". For several years, fans of fighting games feared their time was coming to an end. What few games that did come onto the market usually failed to find mainstream appeal, and some were even flops in the hardcore scene as well. Even worse, it became increasingly difficult and expensive to maintain the machines that ran these games. Some games were never ported to a console, or even if they were, were not "arcade perfect" or were not available on a next-gen system. Even as new gaming consoles were released, players were still forced to bring old systems and cabinets, controller adapters, and jury-rigged setups to every tournament, and these had a habit of being unreliable. Many of these problems, however, came to an end in 2009. And, ironically, it would come back to Capcom and Street Fighter.

In 2009, after positive reception to Street Fighter II Turbo: Hyper Fighting on Xbox Live Arcade, Capcom announced the development of Street Fighter IV. As this was the first new Street Fighter title in over a decade (not including various crossover fighters), the FGC highly anticipated the new game—particularly when it was announced that the game would be highly modeled after the most-popular Street Fighter II and not the Alpha or III series. This meant that both old-school players and new players would be able to play on fairly equal terms. Street Fighter IV was a tremendous success and is credited with resuscitating the FGC almost overnight, creating a new boom of fighting game popularity in The Seventh Generation. Thanks not only to a welcoming community but extremely successful marketing and support from Capcom, SFIV took the fighting game world by storm and became the new de-facto main event for most major tourneys. It also brought an influx of new players and Fighting Game afficionados into the mix, and has explosively increased the number of competitors. It has even brought players who had retired from the community back into the fold. The FGC has rolled with this new momentum and has expanded its curriculum to include new tournaments, including more Majors and local events as well as live-streams to allow fans to watch these events in real time and hear commentary which explains the matches as they happen. Sponsorship became a reality starting in 2010 with franchises like Evil Geniuses, Broken Tier, Mad Catz, and others paying players for free advertising. Daigo Umehara, a legendary Japanese player pictured above, even makes a living by Beta Testing games and merely stating that he likes it! Not everything is well in this new community, however. As mentioned before, other events such as Major League Gaming have outpaced the FGC's growth. While not necessarily less demanding, MLG games have a larger fanbase to pool from as most of them also come from series which benefit from a robust Single-player campaign. Also, it has been noted that many of these games cater to PC gamers as well as those with a higher level of income due to the expense to play them at a competitive level. Thus, the model which has worked for MLG does not carry over easily to the FGC, which although doing well, has yet to reach its potential. Further, the FGC is still very much a "boys club" and remains crass, rude, and boorish at times. Turn on any popular tournament stream and it's likely that you will hear something not suitable for small children of the faint of heart. Female fighting gamers, though increasing in number, are still fairly rare. This has led to accusations of sexism and harassment from more outspoken and vulgar members of the community, most notably on the controversial Cross Assault reality web series. The years 2011 and 2012, in particular, saw a resurgence of the fighting game genre, with the release of several new titles: Soulcalibur V, The King of Fighters XIII, Mortal Kombat 9, (Ultimate) Marvel vs. Capcom 3, Tekken 6, Skullgirls, Virtua Fighter 5: Final Showdown, Street Fighter X Tekken, and many, many more.

Youtuber Maximilian Dood made the case

that the next generation of fighting games has already begun and, ironically, is due to the decline of Capcom-made games (just like the Second Generation was). If accurate, then the hypothetical new era began sometime between 2017-2018 with the release (and subsequent failure) of Marvel vs. Capcom: Infinite. During that time, other games such as Tekken 7, Dragon Ball Fighter Z and Super Smash Bros. Ultimate rose to prominence. As a result, the Marvel series was completely absent from EVO for the first time ever in 2018, and even Street Fighter was replaced as the marquee event in 2019. A few hallmarks of this era include the use of Discord and its various messaging servers as the new hub for players to share information, and increased concerns about the stagnation of fighting games in mechanics and content. In 2019, Youtuber Sajam made an infamous video

calling out fighting game developers for scaling back on essential features such as good online netcode, in-depth training features, and other vital content. Another significant development during this time was the increasing globalization of fighting game competition, most notably punctuated by Pakistan rising as the dominant scene in the Tekken community (led by Arslan Ash) overthrowing Korea, who had been dominant for nearly 2 decades. In the Street Fighter community, the Dominican Republic also arose as a significant threat, with MenaRD leading the charge. And in Super Smash Bros. Ultimate, Mexico's MKLeo quickly arose as the fighter to beat, taking several tournaments and putting on a clinic to clutch a bracket reset and win the Grand Finals at EVO.

Local Streams
With the explosion of live-streaming on sites such as Twitch, many local fighting game events have sprung up which can be viewed at their respective channels.

Evo and other Major Tournaments

The 2019 Evolution Championship Series was held August 2-4, 2019 in Las Vegas, Nevada. For the first time ever, Street Fighter was supplanted as the marquee event by Super Smash Bros. Ultimate. The winner of each respective tournament were crowned "Evolution World Champion" until the next tournament in 2020.
2019 Evolution Championship Series
Evo 2019 Champions
Other Tournament Seasons
Super Smash Con 2019 Smash Bros Champions note The Smash Community has several major tournaments yearly, each comparable to EVO (including EVO itself), but Super Smash Con is the biggest so far in 2019.

Capcom Cup 2019 note The eighth annual officially-sponsored tournament from Capcom, serving as the finish for the annual Capcom Pro Tour and the fourth to feature Street Fighter V.

Tropes Common To This Community

You are all free now!