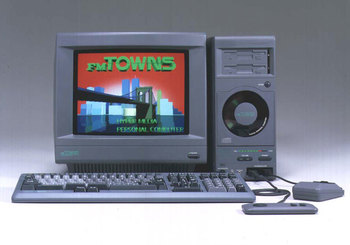 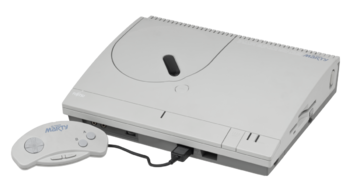 The FM Towns Marty
The Japanese electronics and telecommunications company Fujitsu first entered the personal computer market in 1981, but their impact on the 1980s Japanese computer market was fairly small, despite the marginal success of their 8-bit home computer FM-7. In 1989, Fujitsu introduced the FM Towns, a state-of-the-art 32-bit computer which took its name from Nobel Prize winner Charles Hard Townes.note ("Townes" was the unit's code name while under development. The "e" was dropped to make the pronunciation clear.) The FM Towns was one of the most powerful PC platforms released up until then, rivaled only by the Sharp X68000 (which had better graphics, but weaker audio and multimedia capabilities).
Advertisement:

Advertised as a "hypermedia personal computer," the Towns retained compatibility with Fujitsu's FMR series of MS-DOS business computers, but offered many more features, including a 32-bit Intel CPU, 32,768 simultaneous colors (like the Sharp X68000, but unlike the more popular PC-98) out of a 16.78 million color palette, and a built-in CD-ROM drive. Indeed, the system's graphical operating system, TownsOS, booted straight from a CD. The FM Towns, being more expensive than the PC-98, was marketed to high-income households and educational institutions, and thus its market niche in early-1990s Japan became somewhat similar to that occupied by the Apple Macintosh in Western countries.

The fact that TownsOS is basically MS-DOS with the DOS/V Japanese language supplement and a custom launcher GUI slapped on meant that it is compatible with common Japanese MS-DOS programs written for Japanese IBM PCs, and simpler textmode-only programs will work across the FM Towns, NEC PC-98 and IBM PC platforms unmodified. However, the reverse is not true, as games written specifically for the FM Towns machines require the specialized graphics and sound chipset to always be present, meaning it can not run on PC-98 or IBM PC machines.

Video games were available on the FM Towns from the start, though few exclusive titles emerged on the system. The system's game library thrived on high-quality Arcade Perfect Ports, some of which never appeared on other home systems, and enhanced versions of PC-98 and Western computer games.

In 1993, Fujitsu launched the FM Towns Marty, a console version that sold for half the price of the computer. The Marty was compatible with most but not all FM Towns games, including those released on floppy disks. Like many other companies' attempts at creating console versions of popular computers, the Marty never really caught on.

The FM Towns was ultimately discontinued in 1997. In a reverse of what happened with the PC-98 where the platform folded back into the main IBM Personal Computer platform, the FM Towns machines gradually lost their uniqueness as PC hardware caught up and Fujitsu gradually co-opted PC standard hardware while throwing out their unique graphic and sound chipset under the bus (compatiblity is still maintained for older software, but developers were encouraged to develop for Windows 95 in general instead). FM Towns machines too ran Windows 95 by the time they were discontinued.