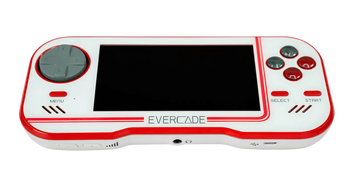 The Evercade is a handheld retro console released in June 2020, differing from the average retro-compilation handheld consoles you can find on Aliexpress or eBay by holding official licences for their games and distributing them in cartridges like consoles from major companies.

The project was officially announced in July 2019

, created by an independent UK company who licensed the rights to titles from famous companies like Atari and Bandai Namco Entertainment (specifically the Namco Museum brand), as well getting defunct titles from Technos Japan (part of Arc System Works), Interplay Entertainment (including some games from Titus Software, bought by Interplay in the 2000s) and Data East (part of G-Mode). And if that wasn't enough, Evercade also got independent games from companies like Mega Cat Studios, Piko Interactive (40 Winks), Bitmap Bureau (Xeno Crisis) and Big Evil Corp.

Evercade works just like the old and known handheld consoles such as the Game Boy, Game Gear or Neo Geo Pocket: it's a fully portable video game handheld with interchangeable cartridges. No internet connection required, no virtual consoles, no Downloadable Content. Just a cartridge with video games and that's all. Evercade was created with a specific Target Audience: retro-gamers who want a console to play and collect. Every cartridge comes with more than one game, being from 2 games to 20, all of them with collectable boxes with their exclusive manuals. The handheld itself has a retro design that evokes the Nintendo Entertainment System (colors and design) and Sega Genesis (the button system). The battery lasts for 5 hours.

The games come from consoles of The '80s and The '90s, like Atari (2600 and Lynx), NES, SNES and Genesis. This includes indie games and ports released for those consoles more than 10 years after being discontinued.

A console version, called the Evercade VS, was released on November 2021. It supports two simultaneous cartriges, four player multiplayer, and internet updates which include additional hidden games.

, featuring more information, videos, the game library and where to buy in your zone (if you are from US and Europe, of course).