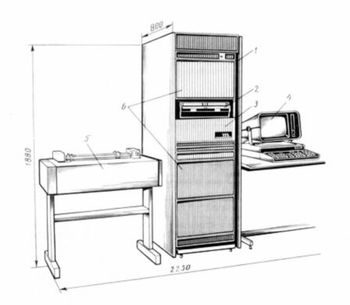 Yep, it was that big.
Advertisement:

It's actually pretty strange to describe Elektronika-60 as a video game platform, mainly because whatever uses its designers ever envisioned for it, video games most certainly weren't among them. The Big Sixty was essentially a first successful Soviet attempt to finally end the era of Big Iron that was starting to feel a little bit too comfortable in the late sixties. But while it wasn't a mainframe, it still was what it was — a honking big industrial mini, a clone of Digital's PDP-11/03 that some big honcho in the Ministry of Electronic Production fell in love with. It even shared the /03's awkward sectioned CPU, based on the indigenous 581 chipset — a clone of the Western Digital's p-system chipset used in Digital's machine. Thus, it was an honest to Earth PDP-11 clone and ran its software pretty well, which basically was the whole point. As such, it was a really popular machine, and many a plant or a lab in the Soviet Union had one or more.

Inevitably, at some point its users became tired of running it for "serious" applications and started to tinker. At first it was mostly classical PDP-11 entertainment fare, actually common for most mainframes and minis, like Colossal Cave or Space War, but then people begun to get creative, and finally one fine day near the end of the platform's life (in 1985 its age was already starting to show) made it a piece of history. A brilliant fellow arrived, named Alexey Pajitnov. Yes, you guessed right, the guy who invented Tetris. Pajitnov, at the time a programmer for the Dorodnicyn Computing Centre of the Academy of Science of the USSR in Moscow, had some free time on his hands, a pack of tetraminoes and an unused Electronika-60 — and thus maybe not the most famous (there's always Pacman, after all), but certainly the most addictive video game ever designed was born.

This machine is also notable for popularizing the PDP-11 platform as a whole in the Soviet Union. While it was one of the first PDP-11 compatible rigs in the country, it was enormously popular and spawned dozens of different machines of all sizes and performances, from large industrial installation to tiny home computer-sized videogame platforms, but all generally DEC-compatible. In short, the influence of this computer and its proponents in the Ministry of Electronic Industry basically led to the Soviet computer industry standardizing around DEC products — first PDP-11 and later VAX, their influence still felt long after PC won over.