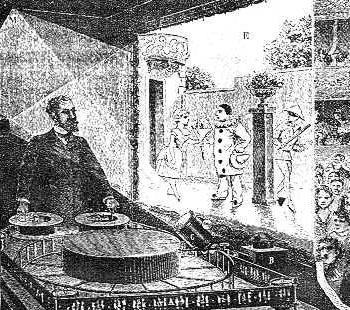 This section of the History of Animation covers animation in its most primitive forms. There are no stars, no series, nothing concrete.

Now, this era of animation has no definite starting point. Why? Because in fact, animation as a whole is as old as mankind itself. Even in early cave paintings you can see that our ancestors were trying to make pictures that communicated a sense of motion or events happening in sequence.

As times changed and knowledge grew, many toys and gadgets were invented to take advantage of a phenomeonon called Persistence of Vision. If an image appears in front of your eyes and then suddenly dissapears, your brain holds onto that image for a moment even after it's gone. If the missing image is replaced with a different one before your brain has even had time to register the dissapearance of the first one, your brain can be tricked into perceiving one moving image instead of two still images. This is demonstrated by the thaumatrope, a toy consisting of a disc with a picture of a bird on one side, and a picture of an empty cage on the other. The disc is held by strings on either side which can be wound up and then pulled to make the disc flip end over end; at full speed, it looks as if the bird is trapped in the cage.note You can actually see this device used at several points in Tim Burton's Sleepy Hollow

A step up from that are devices such as the phenakistiscope and zoetrope from the 1830s, which incorporate a sequence of images on a spinning disc viewed through slits. The zoetrope has a spinning drum with a sequence of pictures printed around the inside, with vertical slits cut into the upper part of the drum. When you spin the disc, the outer part pierced with slits acts as a shutter mechanism which only lets you see one picture at a time, so that instead of just a blur you will percieve a moving image. The downside of such a method compared to projection is that you can't exhibit animations to numerous people at once, since only a few people can crowd around the device to look inside. It is also limited compared to the later medium of film because the limited circumference of the disc restricts the length of animation that can be displayed on it; the animation is limited to a short, continuous loop lasting a few seconds at most.

Image projection was a way to display an animation simultaneously to multiple people. As far back as the late 18th century, there had been "Magic Lantern Shows", which were the forerunners to cinema. Essentially they were someone moving silhouette puppets around on the equivalent of an overhead projector against a translucent painting as background, accompanied by a band or narration. This projection principle was incorporated by Eadwaerd Muybridge, whose Zoopraxiscope constructed in 1880 used pictures painted on a transparent glass disc, which were projected onto a screen with a beam of light. However, the circumference of the disc still limited his subjects to short loops of human and animal motion.

Charles-Émile Reynaud would take one of the most advanced steps in this era with his Théâtre Optique system patented in 1888, which was an improvement of his earlier praxiniscope. It involved 300 to 700 pictures painted on glass plates arranged in a long belt which was fed through a projection system. With this many pictures, and the ability to rewind it to make use of Recycled Animation, Reynaud was able to exhibit animated films up to 15 minutes long.