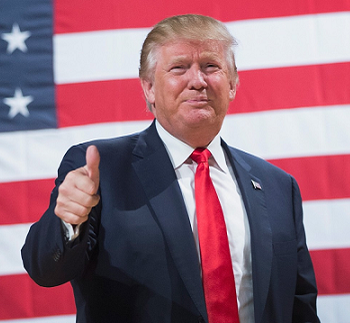 Donald John Trump (born June 14, 1946) served as the 45th President of the United States of America between 2017 and 2021, succeeding Barack Obama and was himself succeeded by Joe Biden. A prominent real estate mogul and billionaire, he had been a public figure long before his election as President.

His 1987 memoir, The Art of the Deal, sold extremely well as people began to identify him with American entrepreneurship and shrewd power brokering. It was around this time that Trump started to appear As Himself in television Dom Coms and films, including Home Alone 2 and The Fresh Prince of Bel-Air, where the characters invariably treat him with a reverence usually reserved for royalty. His golden boy image took a beating in The '90s as the result of bankruptcies (which he insists were actually strategic business decisions), a much-publicized extramarital affair, and mounting debt (partly as a result of the 1980s recession), but he managed to bounce back.

Since 2004, Trump starred in The Apprentice, his own reality TV series (created by Mark Burnett, the brains behind Survivor) on NBC. The show consists of a selection of candidates competing against each other for an open slot in one of Trump's companies. The program was wildly successful for the first few seasons; however, the popularity has been declining since.

Trump briefly ran for the Republican presidential nomination for 2012. His campaign was based partially on the "birther" theory that Obama was not a natural-born United States citizen, but after a copy of Hawaiian hospital records for President Barack Obama appeared, the campaign quietly went away.

In 2015, Trump again announced his intent to run for president. His campaign was marked by controversy, this time enough to cause several companies to end their business deals with him; the NBC and Univision have refused to air the annual Miss USA pagent, and NBC will be continuing The Apprentice without Trump as the host.

Trump won the 2016 presidential election with 304 state electors, becoming the fifth person to lose the popular vote but win the presidency. Hillary Clinton telephoned Trump with her concession, and he was inaugurated the following January. His presidency was extremely contentious, resulting in two impeachment trials. Running for reelection in 2020, he was defeated by Joe Biden who won the popular vote and 306 electors. Joe Biden succeeded him in January 2021.