Dicenote "Dice" is a plural; the proper singular form is "die". The word "dice" is however quite commonly also used for a single die, not least because unlike "die" it cannot be confused with a common English verb that many people find uncomfortable to use. are ubiquitous low-tech randomness generators that have been in continuous use as gaming aids for well over four thousand years. Their basic design exploits the inherent imprecision of human movement (of the hand rolling the dice) and various isohedral symmetries (most commonly, those of a cube) to produce a uniform distribution of random numbers, which, in turn, can produce near-normal (a.k.a. "bell curve") distributions by rolling many dice at once and summing up the results.

To simplify the notation of various dice rolls, following convention has been universally adopted by gamers:

The dice notation has long become one of the symbols of gaming and of role-playing games in particular, especially ever since Wizards of the Coast had trademarked their d20 System. 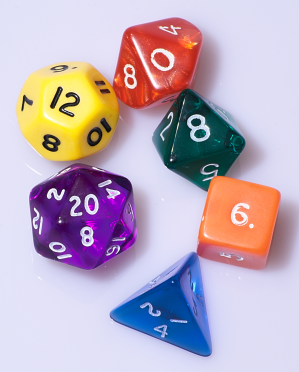 ◊.
A fair die is one that has the same chance of landing on each face, which is naturally achieved by convex isohedrons

. That said, cheap plastic dice used in most games are not particularly fair and can easily land on a particular face twice or half as often as they should due to manufacturing flaws. This simple fact is behind all popular superstitions about "lucky d20s".

The most popular die shape is the six-sided cube, followed by the rest of the Platonic solids

. The most common dice (which, incidentally, are all used in Dungeons & Dragons) are:

Less common shapes include d2 (also known as "coin flip"; easily emulated by rolling any common die and reading odd results as 1 and even ones as 2), d3 (usually emulated by rolling 1d6, halving the result, and rounding it up), and the so-called "percentile dice" or d100 (also noted as "d%" or "d00"). While the last one is technically available as a physical non-fair die (see Zocchihedron

), it is most commonly emulated by rolling 2d10 and reading one die as units and the other as tens. The (cardinally) largest perfectly numerically balanced fair die possible is the d120 or disdyakis triacontahedron

Lastly, many games come with custom dice, although these are usually just re-skins of regular dice with non-numeric faces rather than truly unorthodox shapes. Perhaps the most iconic of these are the "FUDGE dice", denoted as dF, which are regular d6s that have plus, minus, and blank faces (two of each) instead of numbers on them.

Dice are commonly used in Board Games to generate random numbers within a certain range in order to randomize, for instance, how far a player token moves on its turn in Monopoly or which tile generates resources in Settlers of Catan. Games may also exploit non-uniform roll distributions to make certain outcomes more likely than others: when rolling 2d6, for example, a total of 7 is six times more probable than a 2 or a 12.

In Tabletop RPGs, dice are usually used to resolve whether a player's character succeeds or fails at some in-game task. Two most common methods to do so are called "roll-over" and "roll-under". Both involve a specific numeric threshold, but in roll-over, you succeed if your total roll is at least as high as that target number, while in roll-under, you have to roll below it. Historically, the target numbers for roll-over mechanics have been set by the Game Master with optional guidance from the Game System (such as in Dungeons & Dragons), while roll-under more often uses the character's own skill scores as target numbers (such as in Call of Cthulhu).

A slightly modified roll-over can be used for opposed rolls, where another player's roll replaces the target number — in other words, the player with the highest total wins. Although opposed rolls can be based on roll-under, too, they usually require additional tricks to factor in the contestants' skill levels. An opposed roll can involve multiple players (for instance, everyone at the table usually rolls for Action Initiative at the same time), and they don't even have to all roll the same (number of) dice, depending on the system. Some game systems (e.g. Sorcerer (2001)) don't have unopposed rolls at all and instead frame inanimate and even intangible obstacles as if they were hostile NPCs.

In all cases, players can usually modify either the raw roll or the target number (or both) up or down via various means. These numeric modifiers are their main means of manipulating the probability of success in most games. Others also include explicit Luck Manipulation Mechanics that allow the players to re-roll their dice by expending a limited player resource (Inspiration in D&D 5E, Hero Points in Mutants & Masterminds, etc.) or simply by GM Fiat (Advantage in 5E). Depending on the rules, the player either may take the best of two results or is forced to stick with the second one, even if it's worse.

Games where you roll two or three dice may also have special mechanics for rolling doubles (when two dice land with the same face up): in Monopoly, for instance, it gives you an Extra Turn; in Unknown Armies and Eclipse Phase, it scores a Critical Hit or a Critical Failure; in Dragon Age, it earns you Stunt points (see below), etc. Because of the birthday paradox

, however, this mechanic loses its appeal with larger dice pools.

The key distinguishing feature of dice pools is that the players can manipulate their "pool size" — i.e. how many dice (usually but not always d6s or d10s) they roll at once, — as opposed to applying modifiers to standardized rolls. Depending on the Game System used, the results of dice pool rolls can become extremely non-linear and difficult to predict, which frustrates some players (who prefer clear probabilities), while energizing others (who like not knowing what happens next). Dice pool mechanics come in three basic categories:

Some interesting twists that use the physical or mathematical properties of the dice to introduce unusual game mechanics: