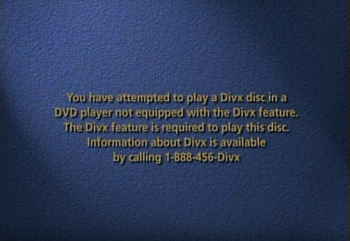 The only thing you can see these days if you attempt to use a Divx disc, even with a compatible player.
"In retrospect, DIVX seemed like the ultimate short-sighted technology. I mean, Hollywood Video and a lot of the mom-and-pop stores were already carrying DVDs by the time DIVX finished its national rollout in late 1998, and of course, Blockbuster followed suit shortly thereafter."
— Ben Minnotte, on why DIVX may have been doomed from the beginning
Advertisement:

DIVX (short for Digital Video Express), not to be confused with the video codec called DivX (originally DivX ;-) - named after DIVX as a joke), is an obsolete video format launched in 1998 that existed briefly when DVDs were just being introduced. The format was launched and heavily promoted by the now defunct Circuit City store chain (and by pure coincidence, all the other stores that carried it went belly up too.)

This format was similar to DVD, but required a special "DIVX-enhanced" DVD player. It incorporated a form of DRM which limited playing of a disc to 48 hours unless a special fee was paid to play the disc a second time or "convert" the disc into an unlimited play disc. The Internet wasn't quite as big back then, so players had to connect to the company's servers over a phone line (much like how satellite TV boxes had to connect to phone lines to access pay-per-view and other functions). It was intended as an alternative to video rental, as the 48-hour viewing period began when the viewer pressed the Play button and the discs did not have to be returned to the store.

Some of the major Hollywood studios had a significant connection to the launch of DIVX. Los Angeles law firm Ziffren, Brittenham, Branca & Fischer, developed the format, and Circuit City was the biggest backer of the format, selling discs and DIVX-capable players from the get-go. Several other electronics chains also supported the format, including The Good Guys and Canadian chain Future Shop. DIVX also had anti-piracy safeguards encoded to the discs, which DVD had yet to perfect. DreamWorks, 20th Century Fox, Paramount, MGM, Disney, and Universal supported the format right away as their format of choice instead of DVD, though the latter three of these studios had already started releasing titles on DVD by the time DIVX was launched. (Fox and Paramount began putting out their own DVD releases in November 1998, while DreamWorks launched its titles on DVD the next month.) Warner Bros. and Sony Pictures were staunch supporters of DVD from the very beginning, and were the only studios that refused to release titles on DIVX.

An Internet backlash arose due to the launch of DIVX. Websites protesting DIVX argued that because the format was releasing titles in pan-and-scan and without special features (except for the Theatrical Trailer on some titles), and because video plays were being monitored (which some felt to be Orwellian in nature), there would be a major threat to DVD if DIVX becomes popular. Video stores were concerned that its "no late fees" catch would deter people from renting movies more often, and even some chains such as Hollywood Video and Blockbuster began making titles available for rental on DVD. Environmentalists were concerned that consumers would simply throw the discs away after watching them; Circuit City attempted to counter this by encouraging consumers to recycle the discs at their stores.

DIVX was officially discontinued on June 16, 1999, and the DRM servers were permanently shut down on July 7, 2001. Circuit City's bankruptcy was significantly tied to the format's failure.

These days, the only thing DIVX is remembered for is a talking DIVX machine character in Penny Arcade; as Gabe used to work at a Circuit City, as well as the video codec named for it. Both the character and the codec have lasted far longer than their namesake.

By the way, buying and attempting to play DIVX discs in this age isn't recommended. While DIVX-equipped players will play standard DVDs, the servers required to play DIVX discs were shut down decades ago, so even compatible systems will give you the message above. Furthermore, the DRM used on the discs have seemingly never been cracked, and all DIVX titles are easily available on other formats, effectively making the discs only useful as coasters.

For more information on the DIVX format, Oddity Archive made a retrospective on the format and why it failed

. Wikipedia also has an article