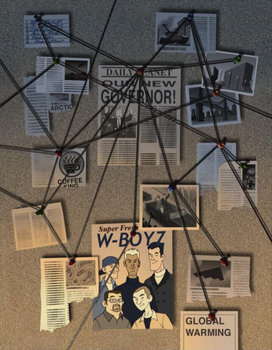 "It was so much easier to blame it on Them. It was bleakly depressing to think that They were Us. If it was Them, then nothing was anyone's fault. If it was Us, what did that make Me? After all, I'm one of Us. I must be. I've certainly never thought of myself as one of Them. No one ever thinks of themselves as one of Them. We're always one of Us. It's Them that do the bad things."
— Terry Pratchett, Jingo
Advertisement:

Conspiracy theories are, essentially, Wild Mass Guessing, Headscratchers, and Fanon Discontinuity (in the sense of maintaining that something didn't happen according to the way "official" sources said it did) applied to Real Life. Like all memes, conspiracy theories mutate and interbreed almost too fast for humans to track. Any of the theories and sub-theories mentioned below can be, and in all likelihood has been, combined with any or all of the others by at least one person. Don't be surprised if the theory raises more questions than the original incident in the first place. The only thing such theories prove, if anything, is that we're all too human.note Or... maybe WE'RE The Illuminati?

It is important to distinguish a Conspiracy Theory from a regular theory about a conspiracy. A conspiracy is merely a plan by more than one person to commit a crime, and a theory about it could be made. However, it is different from a Conspiracy Theory, as a Conspiracy Theory explicitly means a fringe theory that purports that events, either in the news or in history, are not as we understand them but really the work of secret cabals of cunning conspirators acting for malicious ends, from merely getting rich to propagating an ideology up to and including world domination.

One very easy way to debunk many of these theories, especially the big ones, is through the use of Occam's Razor: eventually, the postulates you have to accept in order to believe the theory reach improbable or impractical lengths. A tenable conspiracy theory has to overcome at least ten hurdles:

(Before you start reading, it's worth noting that Rationalwiki has an article on a phenomenon they dub "Crank Magnetism"

, which is the curious tendency of people with bonkers ideas to develop or start believing in other, equally bonkers ideas; People who believe one conspiracy theory, for example, have a noted tendency to also believe other conspiracy theories or even non-conspiracy-but-still-bonkers things such as bigotry or science denial. You're going to see a lot of this. Furthermore, research has shown

The list of topical conspiracy theories was too long for a single page. Here they are in alphabetic chunks:

Waldorf: Seems like a lot of people are plotting to Take Over the World.
Statler: This world? Who would want it?
Both: Do-ho-ho-ho-hoh!