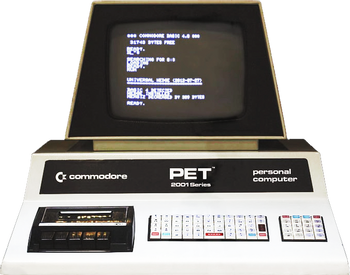 Commodore's entry into the computer world was with their PET (Personal Electronic Transactor) computer, first released in 1977.

In the mid-1970s, Commodore was finding it harder and harder to compete in the increasingly crowded calculator market, and decided to instead try breaking into the developing market for personal computers. They initially looked into partnering up with Apple to bring what would eventually become the Apple ][ to the market, but were unable to agree terms with Steve Jobs and Steve Wozniak, eventually resulting in Commodore founder and CEO Jack Tramiel deciding that the company would go their own way.

Given just six months to create a production-ready design, project lead Chuck Peddle decided to use the KIM-1, a 6502-based kit computer he had designed a couple of years earlier, as a rough basis for the system architecture. A side-effect of this was that, unlike the competing Apple II and TRS-80 (which both launched the same year), the system had no graphics capabilities whatsoever, with the best that a programmer could do in this regard being to try and piece crude graphics together using the in-built character set (which was unofficially dubbed PETSCII). However, what it lacked in graphical ability, the system made up for by including a high-quality, inbuilt monochrome display, as well as a much more capable implementation of BASIC than its two competitors — licensed from, of all people, Microsoft.note (Notably, the young and naive Bill Gates ended up allowing Tramiel to hoodwink him into accepting a terrible deal for the license, which nearly ended up killing Microsoft in its infancy. The company was saved, ironically enough, when Apple realized they needed a better version of BASIC to compete with the PET, and Gates, having learned his lesson, managed to negotiate a much more favorable deal that kept them alive)

At first, the system's main method of storage was an in-built "datasette" drive which recorded data to ordinary audio cassettes. Later models of the system got rid of the internal drive in order to make room for an improved version of the heavily-derided keyboard used by the original model, resulting in Commodore producing the external 1530 Datasette drive — something that would remain a fixture of Commodore's 8-bit computer line all the way up to the Commodore 128.

The system lacked any add-on card slots, something which became an issue when floppy disks began gaining traction as the preferred storage medium for computers, as it made it impossible for Commodore to incorporate a disk controller. Not wanting to alienate existing users, they produced external floppy drives which were effectively stand-alone computers with their own 6502 processor and merely used the main system's peripheral ports for sending and receiving data, an approach that would also carry forward for their rest of their 8-bit line.

Unlike its successors — which may have had a Product Facelift every now and again, but never significantly altered their specifications throughout their lifetimes — the PET was more of a product family akin to the Amiga, with Commodore later producing variants with higher-resolution displays, better keyboards, more memory, and upgraded versions of BASIC. However, this meant that software compatibility between the various PET models could be dicey at best.

The PET was quite popular at first, and would prove a long-standing fixture in many classrooms well into the following decade. Ultimately, however, it was outclassed by its competitors, the Apple II and Atari 8-Bit Computers, and never really caught on the same way in the home market that they did, eventually forcing Commodore to produce the more consumer-friendly VIC-20. It received a small amount of immortality in film, however, as the computer terminal in Captain Kirk's San Francisco apartment in Star Trek II: The Wrath of Khan and Star Trek III: The Search for Spock.