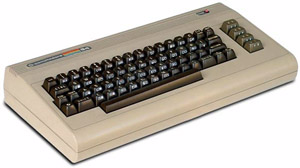 64K/$595
Is it any wonder that Commodore sells more computers than IBM and Apple combined?
Advertisement:

The Commodore 64 was, at one point, the best-selling single (non-Japanese) computer system of all time, with 17 million sold.note There are, obviously, millions more IBM-style Intel-centric PCs made, but they featured a dizzying array of varieties and even self-built systems; the C64 was a single, packaged unit like an NES. It was released in 1982 as a low-end computer comparable to the Apple ][ and the Atari 8-Bit Computers, following on Commodore's earlier VIC-20 system. It was as cheap as the Atari 2600 and is, paradoxically, considered one of the finest personal computing devices ever built while also being partially to blame for The Great Video Game Crash of 1983.

The system was remarkably powerful for the price. The original design was for an Arcade Game board, and the C64 therefore had unusually good color graphics, sprite support, and sound compared to its competitors (though its 16-color palette was a bit drab). The sound chip is still being used by Chiptune artists today, and the computer supported S-Video output in 1982, five years before S-Video was ostensibly invented. It also had an operating system contained entirely in ROM, meaning that there was close to nothing (shy of physically damaging the hardware) that could corrupt the system, making it a hacker's dream machine. There was even a windowed operating environment with desktop publishing abilities available for it (GEOS), and some code genius even figured out how to do multitasking on it. It was also home of the Quantum Link online service, operated by the company that would become AOL.

However, the success of the Commodore 64 was also its downfall. Commodore couldn't discontinue it due to high demand in Europe and Australia, and most people in North America had moved on to the Nintendo Entertainment System for their gaming needs and cheap PC clones flooding the market for general computing by 1990 after clone makers like Compaq, Tandy, Leading Edge, and Packard Bell moved into the mass merchandisers that Commodore previously targeted. VGA graphics and sound cards surpassing the C64's graphics and SID chip around the turn of the decade also prompted a lot of C64 gamers to migrate to the PC. The C64's success also doomed every other Commodore 8-bit project, such as the MAX machine, the Educator 64, the C16, the Plus/4, the C128, the C64 Games System, and the C65.

The Commodore 64 was eventually discontinued in April 1994, when the company went bankrupt due to the now dated parts of the system being more expensive than what people paid for it. This is essentially what happens when Artistic License – Economics happens in Real Life. In April 2011, Commodore announced a brand revival and began accepting preorders for new C64s. The new systems were to essentially combine the classic design with modern internals, running the original C64 BIOS and present-day software. However, as Commodore fans were to come to expect in the following years, the project fell through; this began a long string of Commodore (now owned by an Italian tech company) promising big and failing to deliver, most notably with a branded smartphone that only ended up being available in a few European countries. The closest thing to a hardware revival the C64 has seen is some carefully non-copyright infringing computer-on-a-chip systems housed in a keyboard that apes the original's breadbox design.

Commodore 64 games have been released for the Wii's Virtual Console. It's also one of the most popular platforms for the Demoscene. And a generation has learned to associate Bach's "Invention #13" with this system.

released a microconsole version of the C64, appropriately called the C64 Mini. Similar to other contemporary microconsoles, the C64 Mini is an ARM-based Linux system using the VICE emulator and comes with 64 games preloaded on the system; however, unlike several microconsoles, users can legitimately load their own games and programs using disk and ROM cartridge images on a USB flash drive and update the firmware to fix bugs, add features, and even add new games to the carousel. The company followed up the C64 Mini with a full-sized version, simply called the C64

note unofficially nicknamed the C64 Maxi to differentiate it from its Mini predecessor, with a working keyboardnote The keyboard on the C64 Mini is purely decoration, using a virtual keyboard for games that require keyboard input. An external USB keyboard can be plugged in for games and programs that require extensive keyboard input, especially BASIC., additional USB ports, and the ability to switch among the built-in games carousel, C64 BASIC mode, and VIC-20 BASIC mode; in 2020, Retro Games released a variant of the C64 based on the VIC-20.