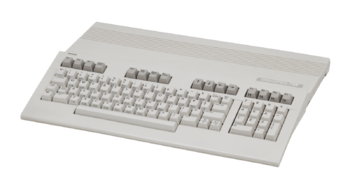 As of the start of 1985, Commodore's track record was thus: the Commodore PET had been a modest success, the VIC-20 had been more of a success, the Commodore 64 was a major success, and the Commodore Plus/4 was a huge... failure. When doing research among the Plus/4's intended market of business users to find out exactly what went wrong, Commodore were told that the system's more limited feature set compared to the C64 and lack of compatibility with that system were both deal-breakers. So, Commodore decided to redress this by creating a new business-focused computer with more features than the C64, while retaining compatibility with that system.
Advertisement:

The Commodore 128, as the name suggests, can be thought of as a doubling-up of the Commodore 64. Most obviously this was achieved by having twice the amount of memory, but Commodore also added in a second CPU and a second graphics processor. Unusually, however, these didn't make the C128 a true multi-processing system per se, as the CPUs were not only incapable of simultaneous operation, but they didn't even use the same architecture — one was a faster version of the C64's 6510 CPU, while another was the almost-as-ubiquitous Z80 CPU. The system therefore had three operating modes — one was the system's "Native Mode", another was a fairly straightforward emulation of the Commodore 64, with the CPU downclocked and half of the memory disabled, and the third was "C/PM Mode", which was capable of running an included distribution of the C/PM operating system, using the Z80 as the main processor.

In addition to a (very) slightly upgraded version of the C64's VIC-II graphics processor, the system also featured a secondary graphics processor called the Video Display Controller (VDC). In many respects this owed more to the Plus/4's TED chip, as it lacked sprite capabilities, but had a more advanced range of text and bitmap-based graphics modes. The VIC-IIE and VDC each had their own separate output ports (in fact, the latter used the same physical connector as IBM's CGA and EGA standards), giving the C128 the rare-for-the-time ability to drive two displays without any separate hardware, albeit using them both simultaneously was tricky.

Perhaps the most welcome addition to the Commodore 128 was a redesigned disk controller and a new accompanying floppy drive, finally solving the Commodore 64 family's problem of notoriously slow disk access.note (The Plus/4 had technically addressed this earlier, but wasn't compatible with C64 software) The system's C64 back-compatibility mode was capable of using the faster mode, though it was possible to disable it for software that wouldn't play ball (usually where copy protection was concerned).

Despite its advancements, when it came to games the Commodore 128 faced a similar problem to the Plus/4 — the Commodore 64 was already so prevalent on the market that it was much more straightforward to target that platform, especially considering that the C128's CPU and memory upgrades, while nice, weren't exactly a game-changer. As a result, it's estimated that the number of commercially-released games with specific C128 modes was no more than around two dozen in the US, and only a little bit higher worldwide. Despite this, the C128 sold far better than the Plus/4 line, ultimately shifting just under six million units before it was discontinued at the end of the decade; not a patch on its predecessor, but not a bad number at all for an 8-bit computer. The overall better build quality and improved disk access speeds were enough to persuade a number of C64 users to upgrade, but productivity software was where the system really came into its own, thanks to its hardware improvements. And if nothing else, its case design served as the basis for the even more successful Amiga 500 a couple of years later.