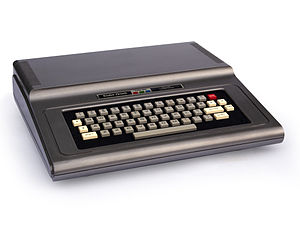 The Color Computer, or CoCo to its fans, was Tandy/Radio Shack's first microcomputer not limited to a black-and-white display. When it debuted in June 1980, the TRS-80 Color Computer was the cheapest home computer that could display multiple colors, until the Commodore VIC-20 came out the next year. Its output was designed to be shown on an ordinary color TV set.

The CoCo was initially co-developed by Tandy and processor manufacturer Motorola with help from the U.S. Department of Agriculture as part of the "Green Thumb" project. By using some of Motorola's chips, including a new, inexpensive color video processor, they built a teletex device aimed at farmers that could plug into a regular color TV. Using the built-in modem, farmers could get information on weather, crop prices and other useful information. A general consumer version called the "Videotex" was released, built around use with CompuServe. It was only a short step to turn the terminal into a full computer.

The original Color Computer came in a silver case with a built-in chiclet keyboard, similar to the TRS-80 Model I. However, despite the use of the "TRS-80" name (which Tandy phased out later in the 1980s), the CoCo was completely incompatible with software written for other TRS-80 models.note In fact, it didn't even use the Z80 CPU that gave the TRS-80 line its name in the first place. The use of the TRS-80 name was pure marketing. Like many other microcomputers of the time, the CoCo could only handle uppercase letters. Graphics on the CoCo were limited to two predefined four-color palettes, one of which had neither black nor white. The CoCo's Motorola 6809E CPU was underclocked, running slowly even by 1980 standards.

The CoCo's first two models went through several revisions each: the silver case was replaced with a white one, the keyboard acquired proper keys, memory was increased, a newer version of BASIC became available, and the "TRS-80" branding was dropped. Microware's popular Unix-like OS-9 operating system was first offered for the CoCo in 1983. The final model, the Color Computer 3, was introduced in 1986. The CoCo 3 had significantly expanded memory and could output high-resolution graphics (up to 16 simultaneous colors) or mixed-case text to a monitor. But by then the CoCo was in decline, and IBM Personal Computer clones such as Tandy's own 1000 series were becoming more popular as home computers. The CoCo still remained in production until 1991.

The British Dragon 32 and Dragon 64 computers had very similar hardware to the CoCo, and were advertised as being 98% compatible.