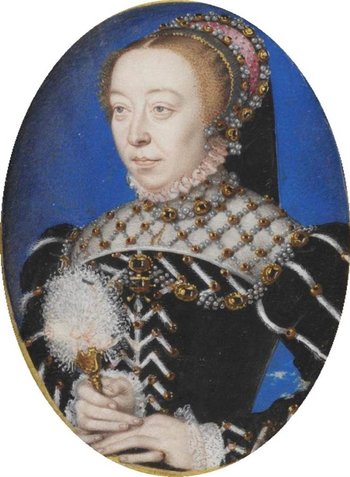 "I ask you, what could a woman do, left by the death of her husband with five little children on her arms, and two families of France who were thinking of grasping the crown—our own [the Bourbons] and the Guises? Was she not compelled to play strange parts to deceive first one and then the other, in order to guard, as she did, her sons, who successively reigned through the wise conduct of that shrewd woman? I am surprised that she never did worse."
—Henry IV, Catherine's son-in-law and first Bourbon king
Advertisement:

Catherine de Medici (13 April 1519 – 5 January 1589) was a member of the powerful Italian Medici family who became Queen Consort of France through her marriage to King Henry II. Despite not ruling in her own name, she was pretty much the poster girl for Regent for Life, as she served as regent for two of her sons, Francis II and Charles IX, and strongly influenced the reign of her fourth son, Henry III. Mary, Queen of Scots was her daughter-in-law, as the bride of her son Francis II, but sadly both her son and the marriage did not last.

She was born in Florence in 1519, daughter of Lorenzo de Medici, Duke of Urbino and ruler of Florence, and his wife, French noblewoman Madeleine, Countess of Boulogne. She was unfortunately orphaned within a month after her birth, leaving her in care of various guardians.

Her chief guardian, Pope Clement VII (himself a Medici and cousin of Catherine's father) kept Catherine in Florence until 1527, when the Medicis were overthrown in Florence by a faction opposed to the regime of Clement's representative, Cardinal Silvio Passerini. Catherine, still a child, was taken captive and placed in a series of convents until Pope Clement could free her with the help of Charles V's troops. She was then free and set to a bright future: marry into the royal family of France.

Catherine was not exactly the ideal candidate for a French bride. French nobilities would always look down on families like the Medicis, who were at the time Nouveau Riche bankers of recent nobility. Despite that, the Medicis were obviously a rich family (which never hurt a marriage match) and being the Pope's niece didn't hurt either. She was set to marry the second son of King Francis, Henry, the Duke of Orléans. They were not expected to become the royal couple until Henry's older brother Francis unexpectedly died of an illness.

The marriage with the future King Henry II was tumultuous. Her guardian Pope Clement VII promised to the King of France, her father-in-law, a huge dowry, but then died abruptly. His successor Paul III refused to pay such a price, so Catherine's value in the "market" fell abruptly. Her father-in-law famously lamented that "the girl has come to me stark naked". At the same time, Catherine was failing to conceive, the King's advisors were pressuring him to seek a divorce for his son and heir. King Francis instead kept Catherine at court, as he had become very fond of her.

After years of conceiving problems Catherine bore ten children and was very enamored of her husband. Unfortunately, Henry was not as faithful and loving and kept numerous mistresses, the most powerful of them being noblewoman Diane of Poitiers, a dame 20 years his senior but renowed for her beauty who was a constant pain in the back for poor Catherine. Diane would run the household instead of her and would be in charge of Catherine's children's education, earning Catherine's endless hostility. At least Catherine became popular in the French court, as she was extremely intelligent, well-educated and courteous. Her father-in-law saw her potential and kept her in his close circle, and also was close friends with her two sister-in-laws. When her husband died in a jousting accident in 1559, Catherine took a broken lance as her emblem, with the words "lacrymae hinc, hinc dolor" ("from this come my tears and my pain"), and wore black mourning (a foreign concept for French, as white has been the color for royal widows till now) in memory of Henry.

Her historical reputation is tainted by the French Wars of Religion. She seemingly adopted a conciliatory policy towards the Huguenots (French Protestants), and tried to soothe both factions with the marriage of her daughter Marguerite to the Protestant Henry, King of Navarre. During the wedding celebrations in Paris, the Huguenot leader, Coligny, was murdered in the massacre known as the St Bartholomew’s Day Massacre, where at least 3000 French Protestant were indiscriminately murdered. Catherines was believed to have been the mind behind the carnage and her reputation never quite recovered. Modern historians tend to reconsider her actual role, that must have been smaller or none, seeing her decades-long efforts in pacify the country. Also there was a bit of a stereotype in seeing Italians as hot-blooded, murderous and poison experts, and a foreign queen was an easy target for slandering (remember Marie Antoinette).

Also it must be said that she lived in troubles times (said wars of religion) and she was left widow in a foreign court with several underage children. Her son-in-law future Henry IV famously said of her the line above of the page. She had indeed to deal with numerous pains in the back: the ambitious and Catholic fanatics House of Guise, her son-in-law Philip II of Spain who was constantly sabotaging her aims at pacify Catholics and Huguenots, the succession crisis. Despite that, she was a force to be reckoned with. Elizabeth I allegedly said that of all rulers of Europe, she was the one she feared the most.

She was by all account a refined dame and a patron of arts in the same style of Italian Renaissance nobility or that of her father-in-law, Leonardo da Vinci's patron. She is also source of Urban Legend for inventing a lot of things, like high-heeled shoes, modern female underwear, forks, and introduce dishes from Florence that would become French traditional cuisine.

Where does Catherine appear in media?