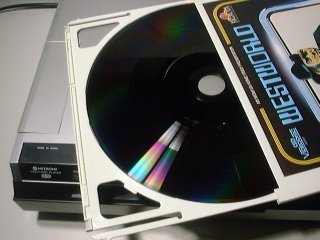 A CED player with disc (exposed from its cover).
"In summary, a bunch of things doomed this poor product. The free rein Labs was given to just do whatever with little regard to practical matters prevented progress from ever being truly coordinated, as did the general resentment of the Labs by other departments. So years passed without anything to really show for it. Then RCA had lost their way under Robert Sarnoff and just kinda stopped innovating altogether for a while, and by the time Griffiths was in charge, they had just kinda forgotten how to innovate."
— Alec Watson, Race to the finish; RCA's final gamble (CED Part 5)

Quite possibly the strangest and most obscure of all media formats, the Capacitance Electronic Disc (CED) was a video disc format developed by RCA that was released in 1981 under the brand name "SelectaVision". It is essentially a record-sized disc like its cousin the LaserDisc, except encased in a plastic cover and read by a record-like stylus. You play the disc by inserting the cover into the player (where the player would then eject the disc), sliding the cover out, then flipping a switch to lower the disc onto a turntable to play.

RCA first began developing the CED format in 1964 as a way to reproduce video in a manner similar to phonograph records. However, no significant progress was made on the project for some time, the result of inter-company politics and issues with the technology. By the early to mid 1970s, they'd progressed to actually creating discs and players. The discs were initially meant to be held by hand, but test audiences often accidentally smudged or scratched them, causing the quality to degrade in those areas. This led to creating the aforementioned covers to protect the delicate discs. The prototype discs were also made of poor quality materials that would deteriorate very quickly leading to skipping issues and eventual damage to the player, forcing RCA to come up with a solution to solve this problem and delaying its initial 1977 release for four years. It nearly got scrapped a few times, but a combination of the Sunk Cost Fallacy and corporate pride convinced RCA to press onwards.

By the time CED made its way onto the market, there already were several problems, despite its low price compared to the competition. Like LaserDisc, they held only 60 minutes per side, forcing users to get up and flip the disc to get to the next part of their movie, or switch discs if the movie were longer than two hours. A common problem was that the stylus would read the same track over multiple rotations, causing a Repetitive Audio Glitchnote This is fundamentally similar to a literal Broken Record, although it's usually the player's fault due to the tone arm getting stuck. Players come with an electromagnet to "bump" the tone arm out of the stuck position. Plus, they lacked recording capabilities, unlike VHS and even Betamax. Also, they had a much shorter lifespan than its competitors — about 500 plays maximum — and the stylus needed to be changed periodically to avoid damage. Because of this, RCA was only able to sell about half of the expected 200,000 players by early 1982, and eventually discontinued CED in 1986 (the players had been discontinued in 1984, but discs continued to trickle out for two more years). Along with numerous other commercial failures, the CED's under-performance in the marketplace led RCA to be re-acquired by its original owner General Electric, which proceeded to break up and sell off what was left (excepting NBC).

Despite all its shortcomings, CED had some advantages. Both the discs and players were less expensive than VHS and Betamax due to the record-like pressing technology of the discs and fewer moving parts in the players. You can seek out chapters similar to LaserDisc and even the DVDs and Blu-rays of today, allowing you to quickly access certain parts of the movie. Also, you never had to touch the discs thanks to the covers. CEDs were also the first video format to feature UPC codes on the packaging, long before it became standard practice on home video.

It was discovered during development that JVC had poached the technology of the disc system and had started recruiting for its version, which they had improved on from RCA's attempt; this eventually became the VHD, or Video High Density, which is similar to a CED but was slightly better, and could even interface with MSX computers for various games released on the format. That said, VHD suffered a similar fate as the CED did, and never got a wide release in areas outside of Japan.

More information about CED can be found here