Bosnia and Herzegovina (Bosnian, Croatian, Serbian: Bosna i Hercegovina, Cyrillic: Босна и Херцеговина), abbreviated BiH or B&H, sometimes called Bosnia–Herzegovina and often known informally as Bosnia, is a triangular-shaped, mountainous country located in Southern Europe. The country is almost entirely landlocked, except for a tiny outlet to the Adriatic Sea in the Herzegovina region, surrounding the port city of Neum. Like its neighbors, Croatia, Serbia, and Montenegro, it used to be a part of Yugoslavia.

The name "Bosnia" is derived from the Bosna river, which rises near the capital Sarajevo and runs to the north, flowing to the Sava river on the border with Croatia. "Herzegovina" is derived from the South Slavic name of a dukedom (from German herzog), specifically, the Duchy of Saint Sava (Hercegovina Svetog Save). There is no precise delimitation of both regions and the two are not used administratively, though Herzegovina is usually thought to make up the southern quarter of the country, with the rest being taken by the Bosnia region.

Bosnia's topography affects its history. Although it was nominally part of other powerful European empires, such as the Byzantines and the Hungarians, the harsh mountainous terrain made it difficult to get meaningful access to the country. For much of the Middle Ages, Bosnia was considered the Balkans' backwater region. In the 11th century, a religious movement called the Bosnian Church arose and spread among the population. It was quickly condemned by both Catholics and Eastern Orthodox alike as a heretical sect, further isolating Bosnia among the Christian world. It's no wonder than when the Ottoman Empire marched to the region in the late 15th century, most Bosnians saw no problem to defect from a side they saw as having abandoned them for centuries and instead adopted another equally "heretical" faith: Islam.

Bosnia remained a loyal part of the Ottoman Empire for four centuries. In 1878, following the Russo-Turkish War, the Austro-Hungarian Empire de facto occupied Bosnia, although it was legally jointly controlled with the Ottomans until 1908, when it annexed the region, triggering the Bosnian crisis that worsened its relations with its neighbors, including Serbia, as the latter wanted to annex the region for itself. The crisis came to a head in 1914, when Archduke Franz Ferdinand of Austria was assassinated by a Serb revolutionary in Sarajevo, leading to World War I.

After the war, Bosnia was integrated to the Kingdom of Serbs, Croats, and Slovenes, which after 1929 was renamed Yugoslavia. As you can see, "Bosniak" did not figure out to the name, because at that time, a separate Bosniak ethnicity did not exist. Bosniaks were seen as either Muslim Croats or Muslim Serbs, and for the most part they didn't object to it, either. Until 1993, Bosniaks were classified in the censuses as "Muslims".

Then came the breakup of Yugoslavia. Slovenia and Macedonia managed to declare their independence from Yugoslavia with minimal fuss. Croatia seceded in a far more violent manner, but all in all, there were little hard feelings. The secession of Bosnia-Herzegovina was... something else entirely.

Without getting too involved — partially because it's far too complicated and partially because it's still very sore — there were three ethnic groups living in Bosnia and Herzegovina: Bosniaks, Croats and Serbs. As a rough rule of thumb, the Bosniaks wanted independence, the Croats and Serbs wanted their bits of Bosnia to break away and join up with Croatia and Serbia, respectively. Needless to say, that was a recipe for trouble.

They fought. A lot. Eventually, after three years and more than 100,000 people killed, a peace agreement was signed in Dayton, Ohio, which came up with a bit of a compromise that everyone could just about live with. It goes without saying that the Dayton agreement, while fulfilling its purpose (immediate cessation of hostilities) is nowadays regarded as less than ideal solution in terms of post-war situation, to put it mildly. The agreement truly satisfied neither of the three sides. The Croats were disappointed as they were left without their own entity and instead they were clumped up with Bosniaks into the Federation of Bosnia and Herzegovina. The Serbs on the other hand, while heavily favored by the new agreement, were discontent with the arbitration of the Brčko district. Finally, the Bosniaks were embittered by the perceived disregard of human rights violations during the war (most notably that of the massacre at Srebrenica, which killed 8,000 Bosniaks instantly).

The situation was additionally complicated by the fact that the Bosnian constitution failed to recognize any other ethnic group/minority other than the three dominant peoples. This led to the famous case of Sejdić and Finci vs Bosnia and Herzegovina court case. The United Nations didn't cover itself in glory, either, with its "peacekeeping" forces often forced to watch impotently as civilians were massacred. One particularly notorious episode was the fall of Srebrenica. Or the Siege of Sarajevo, which holds the record today as the longest-lasting siege in modern warfare at three years, surpassing the Siege of Leningrad.

Technically the nation is divided not between "Bosnia" and "Herzegovina" as might be expected from the name, but between the Federation of Bosnia and Herzegovina (Bosniak and Croat) and the Republika Srpska (Serb), with a third, the Brčko District, directly ruled from the central government in Sarajevo, which is simultaneously led by three presidents, each representing a major ethnic group and expected to serve a single four-year term, though one of them would serve as "Chairman of the Presidency", which rotates between the Bosniak, Serb and Croat presidents every eight months. Thanks to the Bosnian War, the country has become homogeneous by administrative division: Republika Srpska is overwhelmingly Serb, while the Federation of Bosnia and Herzegovina is overwhelmingly Bosniak in the center and west (including Sarajevo) and Croat in the south, eliminating any problem of regions being represented by the "wrong" kind of ethnicity.

The Bosnian War gave the world the term ethnic cleansing.

On a lighter note, on February 15, 2016, Bosnia and Herzegovina applied for membership in the European Union. The application and the eventual membership has many citizens of BIH hoping for a change for the better in terms of politics and economy, though the road to full fledged accession will be hard (if not the hardest out of all the remaining former Yugoslav countries accession procedures due to the complicated situation described in this article).

The population of Bosnia and Herzegovina mainly speak a South Slavic language called Serbo-Croatian. In the 20th century, the increasing politicization of ethnicities ended up "dividing" the language into three separate registers called Bosnian (for Bosniaks), Croatian (Croats), and Serbian (Serbs). However, the three are very much still mutually intelligible to each other and most international linguists refuse to see them as anything but one language. This is because there are Serbo-Croatian dialects that do diverge a bit from the standard; standard Serbo-Croatian as spoken in the former Yugoslavia is uniformly based on the Shtokavian dialect, while the Chakavian and Kajkavian dialects spoken in Croatia's hinterland are much more divergent to each other and to Shtokavian (and yet they are classified as Croatian...). The only major difference is in script: Bosniaks and Croats write in Latin, while Serbs write in Cyrillic. 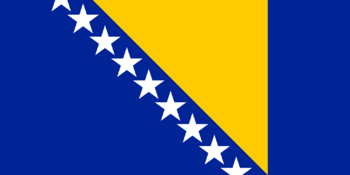 The golden triangle alludes to the nation's three constituent peoples — Bosniaks, Croats and Serbs — as well as the nation's triangular shape. The stars represent Europe, and are meant to be infinite in number. The blue field can allude to either the United Nations or the European Union, whose shade of blue on its flag is used.
Coat of arms of Bosnia and Herzegovina 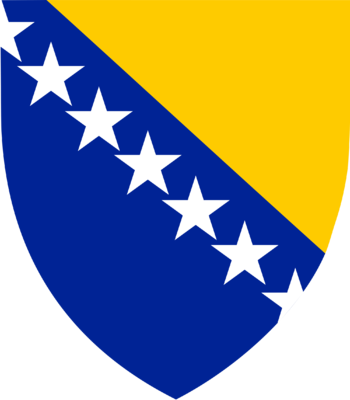 The coat of arms has the same meaning as the flag.
Bosnian national anthem
As Bosnia and Herzegovina is one of the only three countries that do not have lyrics for its national anthem, click on this link to hear what the anthem sounds like