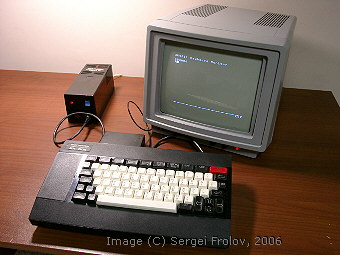 One of the most peculiar Home Computers of its time, Elektronika BK series is a shining example of what happens when you try to produce consumer goods in an economy that's powerful, but not really suited for them. While generally successful and well-loved design, it was a fruit of so many compromises and inconsistencies, that it is generally better identified by its flaws than its strong points even by its fans. One more of the general Soviet horde of PDP-11 clones, it is generally thought to be spawned by the governmental program of computer literacy of 1985, just like BBC Micro and ZX Spectrum, but the real story is much more complex and interesting.

The computer itself is inextricably connected to its CPU, a rather successful chip generally known as 1801 series. Ironically, the very first iteration of the chip, released in 1981, wasn't a PDP clone in the slightest, being a microprocessor variant of the popular indigenous Elektronika NC mini. To demonstrate its abilities, the developers quickly threw together a prototype machine, a quick and dirty solution, not really well thought out — just a CPU and a bunch of a support circuitry. Unfortunately, by that time the organization that developed NC minis had already lost in the powergames of Soviet industry, and the CPU was ordered to be made compatible with the PDP line.

As it was a very solid design for its time it was highly sought after by the industry, due to general lack of good CPUs in the Soviet Union. The demo machine also wasn't lost in the process — while very weird in some senses (like having a ridiculously small amount of RAM for the time, for example), it had a virtue of being very simple and relatively cheap, and the aforementioned school program provided a good incentive to put it into production, so it was quickly polished (somewhat), and released. The release happened in 1985, both for schools and for general public, for the whopping 650 rubles (while the average wage at the time was about 150 r/month). Still, it was immediately popular even if it was supplied "as is", almost without any software or development tools. However, as it was generally compatible with the larger industrial PCs and minis, the thriving cottage industry for software development and hardware upgrades sprang up at once.

Obviously, most of this software was games. Generally created by the one-man "bedroom coders" (another parallel to the British situation), these were very popular, but generally not very polished titles, and thus are not very well known now. Another problem was the machine's limitations — while housing a monstrous 16-bit CPU (basically, a 286 analogue in the terms of processing power), it has a pitiful 16K of RAM and what basically amounted to CGA-level graphics with four colors in low-res mode (256 x 256) and a monochrome high-res mode with 512 x 256 resolution. Still, some games were rather good, and in its late days even such well-known games as UFO: Enemy Unknown were ported onto it (Battlescape part only, based on a Spectrum remake).

Later updates expanded the machine's RAM to the more respectable 128K and added a floppy disk controller, but didn't address the graphics problem — the only real upgrade was the introduction of two Video RAM pages and some hardwired color palettes, because its GPU was still the same chip as the early 1981 demo machine and it couldn't really be upgraded because it was in fact a fully used up 600-gate ULA (making increases in functionality physically impossible), and there weren't any other domestic alternatives at a reasonable price. Still, it ran PDP-11 soft pretty well, and had a Q-bus slot, so it found a widespread use in business and industrial applications as well (as a cheaper alternative to Elektronika60 or DVK), so some are still in use even today. And of course, there's retrogaming and emulation.

An interesting aside: all models of the BK computer were essentially numbered in binary, with 0001 being the original prototype (never released) and 0100 as a further update killed by The Great Politics Mess-Up and following economical meltdown.

As the game development on it was essentially totally homebrew, most were either ports or clones from other platforms. No great franchises started here, but those who strived are still remembered (by some).