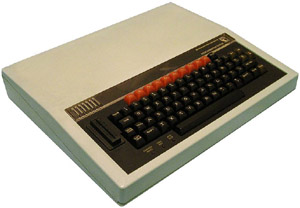 The BBC Microcomputer System (aka "BBC" or just "Beeb"), built by Acorn Computers under the auspices of (naturally) The BBC, was the most popular computer in British primary and secondary schools during the 1980s. The BBC had sought a microcomputer to serve as the cornerstone of their "Computer Literacy Project" and be used to demonstrate a wide variety of features on the educational TV series The Computer Programme; Acorn's microcomputer (known as the Proton in its prototype state) turned out to meet and exceed the BBC's ambitious specifications, but it also became known as a gaming platform and an early technology for computer special effects.

In November 1981, Acorn launched Model A and Model B of the BBC Micro, over a million of which would ultimately be sold. The difference between the two models was that the Model B had twice as much RAM, two more expansion ports and sold for £100 more. The Model A's scarcity of memory was a crippling enough drawback that most were upgraded at some point.

While the Beeb's basic specs were comparable to that of its main competitors, its peripheral interfaces were something else entirely. Like Acorn's previous home computer, the Atom, the Beeb was designed for expandability. True to its lofty goals, the fully-upgraded Model B featured:

A few of these upgrades were standard features of the rare North American version (whose display hardware was modified for output to NTSC televisions).

Second processors were actually available — as well as the official Acorn model (shown off in the promo literature but rarely bought), there was the Torch Systems Z80 board (which could run their version of CP/M and business software), and a few other third-party systems. As it was, the Tube was really a developer feature, included to aid future prototyping — the ARM processor was tested on it and the Acorn Archimedes developed with its aid.

Like the Apple ][ and Commodore 64, but unlike the ZX Spectrum and Amstrad CPC, the Beeb clocked its RAM at twice the speed of its CPU and therefore was able to switch alternately between CPU and video circuits without a speed penalty.

Like most 8-bit home computers, this one featured a BASIC interpreter (BBC BASIC) which was accessed directly from the command line. It also featured a native assembler for writing machine code.

Some of the platform's most impressive games—Elite, Exile, and The Sentinel—employed Procedural Generation to create vast universes in extremely limited memory. These titles continued to stand out when ported to far more powerful machines, and Elite launched an enduring subgenre of Wide-Open Sandbox space-trading-and-combat sims.

In 1983, a stripped-down version of the Model B, the Acorn Electron (popularly nicknamed the "Elk"), was released to compete in the Spectrum's budget price range.

The Beeb remains a Cult Classic mainly because of its remarkable customisability. Network interfaces, extra tape and disk drives, and custom peripherals could be added easily.

It also saw use in the entertainment industry, creating visual effects and synthesised music. One prominent use was by Queen in their song "A Kind of Magic". The BBC itself made as extensive use of this facility as it could, probably so they could be seen "eating their own dogfood", but also for practical reasons. While it depended on what you wanted, you could usually whip up programs for producing effects and captions in-house in a very short space of time. These could then be re-used on demand — while productions had to jostle for time on one of the BBC's Quantel systems, they could have their own BBC Micro(s) as required. The early years of CBBC (when they were in the Broom Cupboard) utilized Micros to generate on-screen graphics, most notably their station idents. The Micro also had a deep relationship with the BBC's Teletext service Ceefax, including telesoftware broadcast over-the-air for Micro users

The BBC Master (AKA Beeb Master or just Master), introduced in 1986, was the successor to the Model B, adding extra memory, upgrades to BBC BASIC, the operating system and the disk filing system, and a built-in word processor and spreadsheet. The BBC Master went through various models before finally being discontinued in 1994.

The Raspberry Pi is often portrayed as a Spiritual Successor, right down to having a Model A and Model B as a deliberate Shout-Out. More recently, the BBC's introduced their own modern microcomputer (again intended for students in schools), the BBC Micro Bit

Games for the 8-bit Acorn family: