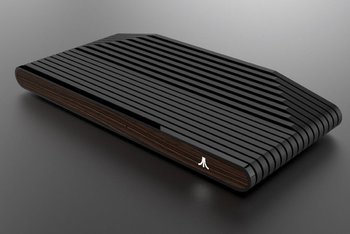 Time machine to the past, bridge to the present.
Advertisement:

The Atari VCS is a microconsole/miniature PC hybrid device produced by Atari, and the company's first console since the failure of the Atari Jaguar over two decades prior. The system comes pre-installed with a collection of 100 arcade and Atari 2600 games through its "Atari Vault", with the ability to purchase other classic games of that era, indie games, and various streaming apps on its digital storefront. Other modern titles are also supported by proxy thanks to the system's "PC Mode", which allows the user to boot alternate operating systems such as SteamOS and Windows. It released on June 15, 2021.

First teased as Project Ataribox in June 2017, it was initially planned for pre-orders and crowdfunding via Indiegogo to open in December 2017, with the console itself launching the following Spring. However, realizations that it would take more time to develop the platform pushed pre-orders and crowdfunding into May 2018, with the new release window being 2019. While the crowdfunding campaign did launch in Spring 2018 and manage to raise $2.9 million (far ahead of the $100,000 goal), the console continuously saw its launch pushed further and further into the future.

Not much was known about the Atari VCS beyond its name prior to release, something which garnered skepticism due to past failed crowdfunding endeavors

, as well as an early interview with one outlet

painting Atari as being unsure about what they wanted the console to be. All of this seemed to point to a device doomed to become vaporware, but despite the numerous delays - which include the upgrading of the system's CPU, the lead designer quitting over lack of payment, and production delays caused by the COVID-19 Pandemic - the Atari VCS would finally start being shipped out to backers in Fall 2020, with the console officially launching on June 15, 2021.

See the original teaser for it here

, and the Indiegogo trailer here

For the original Atari VCS, see the page for the Atari 2600. See also the Atari Flashback series