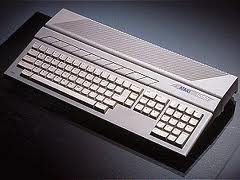 On January 13, 1984, for reasons known only to him, Commodore founder and president Jack Tramiel resigned. He took a short break, then got back into the computer business. Meanwhile, Atari was losing a million dollars a day in the wake of The Great Video Game Crash of 1983, and parent company Warner Communications wanted to sell it. Tramiel bought the hardware division of Atari in July, creating Atari Corporation (the games division stayed with Warner, as Atari Games).

Jack wanted a new computer, and fast. A lot of his friends from Commodore had left to follow him, so a combination of Atari and ex-Commodore engineers started working frantically to get something ready for the Winter Consumer Electronics Show coming up in January '85. The Motorola 68000 was chosen to be the CPU. RAM started at 128K, but was 512K by the time the computer was done. A custom GPU called Shifter allowed three screen modes. Sound would be the General Instrument AY-3-8912. The operating system was to be a port of Digital Research's CP/M, but it proved too primitive and was replaced by a new OS that DR was developing, called GEMDOS. A graphical user interface on top of GEMDOS completed the OS, called TOS ("Total Operating System", or "Tramiel Operating System", but usually just "The Operating System"). Since Jack's computer had similar features to the Apple Macintosh but sold at a far lower price, it was nicknamed the "Jackintosh" by the press. On later system, TOS evolved into MultiTOS, a multitasking Unix-like operating system, an early example of a commercialized open source project as it was derived from the MiNT project.

The Atari 520ST went on sale in July 1985. It was very successful, especially in Europe despite facing stiff competition with the Amiga which launched around the same time. Its strongest points were its low cost and built-in MIDI ports. It was embraced by musicians, and continues to be used by them today. In America, it faced stiff competition from the same Amiga it had to compete with in Europe, but also the Apple Macintosh and even the inferior PC, which was being given rudimentary music capabilities in the form of an AdLib OPL2 add-on card and the slightly better EGA graphics. Fandom Rivalry ensued between the ST and Amiga communities, while the Mac managed to stay above the fray. Game developers saw the ST and Amiga as very similar, so many games were released for both simultaneously. The most famous original ST game is Dungeon Master.

The ST was upgraded in 1986 with one megabyte of RAM, and apart from that the only upgrades were TOS updates and an internal floppy drive. The big update came in 1989 with the STE, which had a 4096-color palette, a blitter, and DMA sound. But with so many older STs out there, game developers couldn't use the new features. The ST was further developed into two 68030-based computers: The TT, a Mac-like workstation, and the Falcon, a successor to the ST. The latter lasted only one year before Atari left the computer business to focus on the Jaguar. After the Falcon's cancellation, due to the platform's continuing popularity in music production, C-Lab, the maker of the Logic sequencer software, produced new Falcon machines for several years under license from Atari, including a rack-mounted model for use in studios.