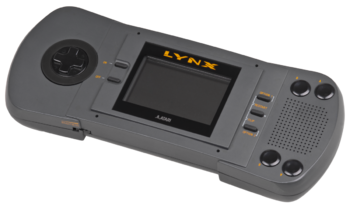 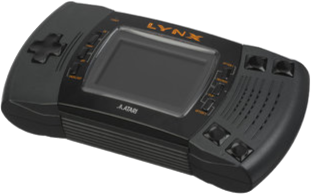 The Atari Lynx was the first color handheld console, and also the first 16-bit handheld console. The system was originally developed by Amiga designers R.J. Mical and Dave Needle for Epyx, under the name "Handy Game". When Epyx faced financial troubles, they sought to partner with a big video game company and eventually made a deal with Atari Corporation. The system was renamed and it released in September 1989 — two months after the North American launch of Nintendo's Game Boy — for US$179.99 with the pack-in California Games.

The Lynx was a beast of handheld far beyond the Game Boy. It was 16-bit with specifications similar to a TurboGrafx-16 crammed into handheld form, with scaling and rotating sprite capabilities a couple years before the Super Nintendo Entertainment System launched with Mode 7 technology. Not only was the screen in color like the later Sega Game Gear, but backlit as well. The Lynx could also support multiplayer games with up to 8 players using the ComLynx adapter — the Lynx version of Todd's Adventures in Slime World was even the first game to ever support 8-player co-op. One of the most interesting aspects of the system is that it was given an extra pair of face buttons so it could flipped upside down and played that way to accommodate left-handed players. A select few games, such as Klax, were even meant to be played in portrait orientation.

While initial sales for the Lynx were promising, it failed to maintain momentum and ended up buried by the Game Boy and even the later Game Gear. The Lynx was bulky, had twice the price tag of a Game Boy, and ate through six AA batteries in four hours. The Game Boy won public opinion hands down, proving the theory of Gunpei Yokoi's Game Boy design paradigm of size, cost and battery life. While Atari released the cheaper Lynx II (US$99) with changes meant to address some of the original model's failings (smaller size, rubber grips for comfort, a cleaner screen, the ability to turn off the backlight to save power), it did little to stop the system's decline.

The Lynx's library was also very lacking. Jack Tramiel, the then-CEO of Atari Corp, had a negative reputation as a business partner, scaring off potentially valuable third-party developers from supporting the system. Atari couldn't pick up the slack with first-party titles due to insufficient resources and their games just not enjoying the same level of appeal found in Nintendo and Sega's IPs. The Lynx ended its 6-year life selling about 3 million units with a paltry library of 74 gamesnote The Lynx actually has 76 officially licensed games, but two of them (Hyperdrome and Raiden) were released after the system was officially discontinued. and little to show in the way of Killer Apps. Despite this, the Lynx enjoys a healthy community of homebrew developers post-mortem and is still receiving new games well into The New '20s.

One last bit of interesting trivia: Lynx games could only be programmed on Amiga computers. Atari was forced to buy product from one of their home PC competitors to make games for their handheld.