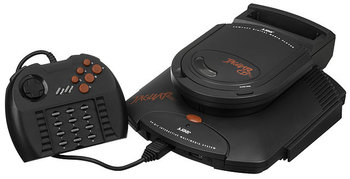 Still lingering in the console race years after losing the gaming public's trust and playing a significant part in The Great Video Game Crash of 1983, Atari Corp decided to chip in with a new effort to get a head start on the next generation in gaming. They hired some outside help to engineer both an experimental 32- and 64-bit console, codenamed "Panther" and "Jaguar" respectively. The 32-bit Panther was scrapped in favor of solely working on the Jaguar thanks to how well its development was going, and the system was out the door as early as 1993 with a price of $249.99 and an aggressive marketing campaign against its competitors, the 16-bit SNES and Sega Genesis and the 32-bit 3DO. Consumers were urged to "do the math" and choose the 64-bit system instead, because apparently having more bits automatically meant the system was obviously superior and it was definitely not just marketing hype.

While Atari claimed that the Jaguar was a beast of a 64-bit system, many games barely looked better than what you'd find on either of its 16-bit competitors or the 3DO, especially compared to the latter when it came to 3D. Outside of the fact that determining power based on the bit number is a gross oversimplification of how bits work, the Jaguar was poorly documented and hard to program for, so developers often defaulted to using the system's Motorola 68000 chip as the main processor instead of its 32-bit chips "Tom" and "Jerry". The 68000 was meant to function as a "manager chip" that wouldn't actually do any heavy lifting, but due to the aforementioned poor documentation and its history of use in previous computers and game consoles, it was the only part of the hardware most developers were comfortable using; unfortunately, the end result was that the Jaguar effectively became an overclocked Sega Genesis when the 68000 was used this way. The system also inexplicably lacked dedicated audio hardware,note The "Jerry" DSP chip had audio capabilities, but more often than not, developers ignored these features in favor of using the "Jerry" chip as a math co-processor to make up for the shortcomings of the "Tom" chip, since trying to make it do both at the same time was extremely taxing on the hardware and not worth the effort to make it work famously leading to its otherwise decent port of Doom missing its soundtrack. These issues led to a common belief that the Jaguar wasn't truly 64-bit and that the technical specs were exaggerated for marketing by adding up the bit numbers of its multiple processors. Whether or not the Jaguar is a true 64-bit system isn't entirely agreed upon, but it definitely isn't on par with the Nintendo 64 and is actually weaker than the PlayStation, a 32-bit system. Many consider the Jaguar to be the biggest blow to the "bits" marketing gimmick due to this; while the Nintendo 64 would still make use of it, the Jaguar's poor showing was what thoroughly cemented public indifference in its usage.

The Jaguar's controller tried to combine a numpad-style button layout that was in vogue during the tail end of The Golden Age of Video Games with a traditional controller, which led to it having a whopping 17 buttons. It was criticized for being overly complicated and cumbersome to use. Ironically, the controller was ill-suited for fighting games despite its excess of buttons and Atari's attempts to make the Jaguar appeal to that specific crowd. A new ProController had to be released to make fighting games playable on the system.

The Jaguar's issues making game development difficult and Atari's inability to properly fund the system meant its library ended up extremely lacking, with it receiving less than 60 games. Despite this, it managed to nab some notable third-party ports, such as the aforementioned Doom (oddly the only console port of the game to be developed by id Software), Dragon's Lair, and Wolfenstein 3-D. Other notable games include the first Rayman and Alien vs. Predator; Rayman was actually developed and released for the Jaguar first before getting ported to other consoles, while Alien vs. Predator was a relatively popular exclusive that was the closest thing to a Killer App the Jaguar had.

The eventual appearance of the Sony PlayStation, Sega Saturn and Nintendo 64 with their sleek 3D visuals, simpler controllers, and superior libraries condemned the Jaguar to an early demise. It was discontinued in 1996 and sold less than a quarter million units in that time, making it a huge flop. The Jaguar's failure heavily contributed to Atari's withdrawal from hardware manufacturing until 2017 and was the end of the Atari Corporation as an independent company. Jack Tramiel would sell the company to Hasbro Interactive, who relegated the label to remakes and compilations of classic Atari games, before selling the company again to Infogrames, who adopted the Atari name and is the Atari that exists today. In 2017, they decided to re-enter the market with the Atari VCS.

Despite all its issues, the Atari Jaguar still has a sizable cult following. Hasbro Interactive (then-owners of the original Atari Corporation's trademarks and patents) even released the Jaguar's encryption codes into the public domain in 1999

so fans could easily make homebrew games. The homebrew community has supported the system all the way into The New '10s, more than doubling the amount of games in its library.

Tropes invoked by the hardware: