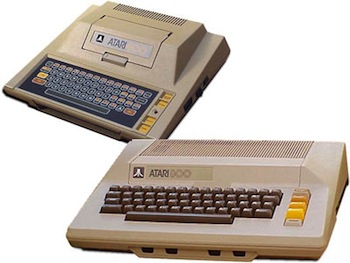 Atari's answer to the Apple ][ was a pair of computers with graphics and sound above anything else at the time. They were very successful until the Commodore 64 showed up.
Advertisement:

They were the first home computers to use custom coprocessors. Jay Miner, who designed the Atari 2600's TIA, headed up the design team for three new chips: CTIA (sprites), ANTIC (text and graphics) and POKEY (sound and I/O). The first models, introduced in late 1979, were the 400 and 800. The 400 was low-end, with 8K or 16K of RAM, no expandability, and a lousy membrane keyboard. The 800 had a good keyboard and up to 48K of RAM. CTIA was soon replaced by GTIA, improving the graphics even more. Both had cartridge ports, and were essentially high-end consoles with computer functionality added on; this reflected their origin as a console to succeed the 2600, which would be realized in the 5200.

They sold well but were expensive to produce. The first redesign was the 1200XL, introduced in late 1982. It had 64K of RAM and a custom version of the 6502. Unfortunately, it was also a mess of unimplemented features, missing internal connections, rearranged ports (breaking hardware compatibility), OS changes (breaking software compatibility) and a high price. It flopped and was quickly discontinued. Meanwhile, the Commodore 64 had arrived, with a price that started low and fell from there.

Atari fixed the 1200XL's problems, and released the redesign as the 600XL and 800XL in late 1983, finally replacing the 400 and 800. (The only difference between the two was memory; the 600XL had 16K, expandable to 64K, and the 800XL was sold with 64K.) They were both very successful, especially the 800XL. Unfortunately, it wasn't enough to cover the losses that threatened to sink Atari (and take down parent company Warner with it) after The Great Video Game Crash of 1983.

Meanwhile at Commodore, founder Jack Tramiel resigned in January 1984 and set up a new company, to make a next-generation computer with the same bang-for-the-buck appeal as the C64; this would become the Atari ST. Warner sold Atari's hardware division to Tramiel in July. Under Tramiel, the 600XL and 800XL were discontinued in 1985. The 800XL was repackaged with an ST-style case as the 65XE, and became the low-end model, alongside the new 130XE, with 128K of RAM. The final member of the family was the XE Games System, a repackaged 65XE, released in 1987 in an attempt to get back into the console market. It went nowhere.

The Atari 8-bit computers enjoyed greater longevity in Eastern Europe, especially Poland, which may be the only country (?) where commercial Atari games were still released as late as 1994.