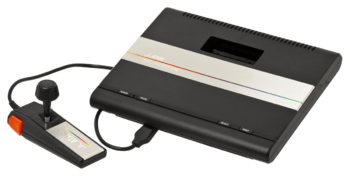 The North American model of the 7800 with the original controller.
Advertisement:

During The Golden Age of Video Games, Atari was king. Their 2600 system reigned over the TV room as the console of choice and the company was a household name. But then a reckoning came, as the failure of the 5200 and the fallout from The Great Video Game Crash of 1983 left Atari a shell of its former self. Atari was split into two entities: Atari Corporation (which continued to produce hardware) and Atari Games (which continued to make games). Atari Corp, now under the ownership of Jack Tramiel, decided to come back into an emerging market of 8-bit games with a new system: the Atari 7800. The 7800 was initially released for a one-month run in June 1984 in southern California, but a number of legal and logistical issues led to its official launch being delayed until January 1986, by which time Nintendo and its Nintendo Entertainment System revived the console market from the Crash.

Atari made sure not to repeat the mistakes they made with the 5200. Unlike its predecessor, the 7800 is fully compatible with the library and accessories of the 2600 right out of the box, because it is a 2600, with a 6502 instead of the 2600's chopped-down 6507, a new graphics chip in addition to the 2600's TIA, and 4K of extra RAM. The 5200 controller was a malfunction-prone abomination, so the 7800 went back to basics and sported nothing but a simple joystick with two buttons. The controller was still criticized, though, so a new version with a form factor more in line with the NES and Master System controllers was released, but only in Europe. All games designed for the 7800 had to be approved by Atari due to the system's lockout mechanism, ensuring there was no glut of third-party shovelware to plague the system like with the 2600. Atari had great plans for this system, the High Score Cart, the 7800 computer add on, and the 7800 trackball were planned but those addons were killed.

The system was roughly on par with the Nintendo Entertainment System in terms of graphics and overall processing power, though sound processing was greatly inferior to its competitors due to constraints related to making the system backwards compatible with the 2600. The sound could be upgraded if an optional POKEY sound processor was included in the game cartridge, though only two games did so. The 7800 somewhat unfairly gained a reputation as being much less powerful than the NES, largely due to the number of lazily done ports from its two predecessors.

While Nintendo were abusing their position as king of the mountain to hoard third-party games for the NES, Atari managed to still get a small amount of support for the 7800. Nintendo had a two year home console exclusivity requirement for third-party developers, but some NES conversions of arcade games were not made by the arcade manufacturers they originated from. The arcade manufacturers were not beholden to Nintendo's agreements as a result, so Atari could go straight to them to secure licensing rights. Atari also had rights to some Nintendo games as a result of negotiations from a failed deal between the two to distribute the Famicom in North America. This led to the 7800 getting its own versions of 7 NES games: Commando, Double Dragon, Ikari Warriors, Kung Fu Master, Mario Bros., Rampage, and Xenophobe.

The 7800 was discontinued in 1991, selling just under 5 million units in its lifetime. This number might not sound impressive now, but the 7800 was able to pull this off despite Nintendo's market dominance during the time period right after the Crash, a lacking library, and middling support from Atari. It also did turn a profit thanks to low development costs and the strength of the huge 2600 backlog. There was clearly still an appetite for Atari's consoles; unfortunately, the company's following efforts with the Atari Lynx and Atari Jaguar wasted their chance to get back on their feet.

Homebrew development for the 7800 was stalled due to lack of a special programming key to bypass the system's lockout mechanism, though the key was eventually discovered in 2001. It's relatively easy to collect for the platform, as the library is so small and few of the games are really rare.