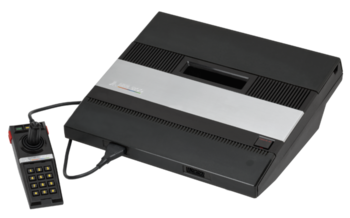 The second model of the Atari 5200.
In the late '70s and early '80s, Atari was riding high as the ruler of the budding video game console market thanks to their hugely successful Atari 2600 system. But with this success came competition from the ColecoVision and Mattel's Intellivision, so Atari felt the need to reassert their dominance. In 1982 they followed up with a brand new console made using technology from their Atari 8-Bit Computers. Enter the Atari 5200.
Advertisement:

The 5200 was fairly ahead of its time in several respects. The first model had four controller ports and the controllers used analog sticks, features that would not be reintroduced until over a decade later with the release of the Nintendo 64 and standardized with The Sixth Generation of Console Video Games. The 5200 was also the first console with a dedicated Pause button.

There were two versions of the 5200 released. The first had four controller ports, as previously mentioned, and an unusual hookup method in that you hooked the power supply up to the RF switchbox, and then a single cable carried power to the console and the A/V signals to the television. The switchbox also automated the process of switching the TV's signal when the console is turned on. The second version went back to two controller ports and having separate power and A/V connections. This model was backwards compatible with 2600 games via an add-on, though it was also unable to play certain 5200 titles, including the port of Pitfall!. Both versions of the system are rather infamous for their large size (13" × 15" × 4.25"), the result of a hollowed-out section in the casing meant to store controllers.

The 5200 ended up a huge flop, being discontinued after only two years and barely breaking 1 million units sold. Its failure is frequently attributed to its lack of native backwards compatibility with the 2600's games — the 2600 was still popular when the 5200 came out and both of the 5200's main competitors had adaptors that let them play 2600 games. The Colecovision in particular presented stiff competition, as it was bundled with an impressive port of Donkey Kong that demonstrated the console's prowess for handling arcade conversions. The 5200 didn't have much to show off its capabilities, being bundled with the unexciting Super Breakout. One of the worst aspects of the console was that the controllers were infamously terrible thanks to the poorly-made analog sticks. They either had no auto-center or a cheap rubber boot to auto-center with incredibly poor reliability, and were even known for their mild tendency to short-circuit. If the 5200 had any hope, it was killed by Atari's downfall during The Great Video Game Crash of 1983, which occurred just one year after the console launched.

Although the 5200 is mocked for its failure and small library, said library does have some good games. Atari made upgraded versions of their classic titles for the system and the 5200's hardware similarities to Atari's 8-bit computers led to game overlap, though the 5200 differs in key areas that prevented straight ports.