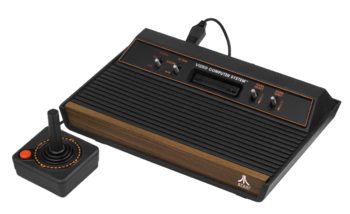 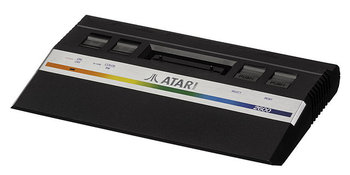 The Atari Video Computer System, later known as the Atari 2600, but best known as just the "Atari" during its heyday, was the first really successful home video game console system, and only the second to feature interchangeable ROM cartridges that allowed new games to be published and installed without modifying the basic system itself. It also featured plug-in controllers that could be swapped out, allowing new kinds of controllers to be later introduced. Originally, just ten games were planned for it. The idea was to make a better system down the line to replace it eventually, but the success of the system changed everything. It was originally launched in September of 1977 in North America for US$199.

The Atari was wildly successful, and was one of the forces that drove The Golden Age of Video Games in the late 1970s and early 1980s. Inversely, the sudden failure of the market for Atari cartridges in the wake of a speculator bubble and the disastrous E.T. the Extra-Terrestrial and Pac-Man games for the system was the trigger for The Great Video Game Crash of 1983. With only a few exceptions, most of the classic games of the era had home versions available for the Atari, some (Space Invaders, and Atari's own Missile Command and Asteroids) more successful than others (Pac-Man, whose failure to match the immensely popular arcade version disappointed many consumers). It also began the dubious tradition of licensed games, with titles such as Superman, Raiders of the Lost Ark, and (worst of all) E.T. the Extra-Terrestrial.

The simple joystick controller for the Atari 2600, with a stick capable of rendering input in any of eight directions (from four buttons) plus a single fire button, has become an iconic symbol of video gaming in general, and of retrogaming in particular. Many '80s and '90s home computers and video game consoles used the same connector, and could use 2600 controllers in a limited way.

In 1986, shortly after the Nintendo Entertainment System revitalized the North America market post-Crash, Atari Corporation relaunched the 2600 as the Atari 2600 Jr. for US$49.99. The revamped console was made as a budget alternative to the newer Atari 7800 (released around the same time), and its redone form factor even heavily resembled its little brother. While the system never truly recovered after the Crash, it still ended up being actively supported for 14 years, from October 14, 1977, to January 1, 1992. Atari Corporation would also continue publishing new games for the 2600 until 1990, as the library still held some value thanks to the 7800's backwards compatibility.

Since 1995, a homebrew scene dedicated to making new games for the system appeared.

In 2005, Atari released the Atari Flashback 2 (the original, based on the Atari 7800, was released in 2004), which is a pretty faithful re-creation of the actual thing

, has been in Development Hell since 2006. The Flashback 4

was released in November 2012, with either 75 or 76 games (some have one more than others do). It was followed by the Flashback 5

is the biggest Atari fan website online and features an almost complete archive of legally downloadable 2600 ROMs (as well as ones for Atari's other systems). Only a few games are unavailable, such as Activision's 2600 library (for legal reasons, but they're available elsewhere online) and a handful of woefully obscure titles.

Games available for the system included: