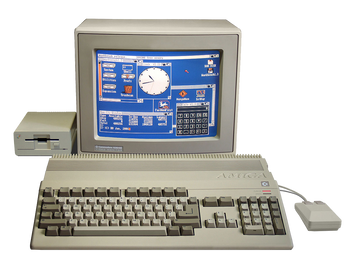 Commodore's 1985 follow-on to the Commodore 64, the Amiga was one of the first true "multimedia PCs", and featured several technologies that were years ahead of their time (including the 16/32-bit central processor). Executive Meddling and Misaimed Marketing kept the system from selling well in the USA, but elsewhere, the Amiga was far more popular and has a cult following to this day. (And when we say "cult", we mean it: Amigans are far more faithful to their platform than even Apple Macintosh fans, which is saying something after all it's been through.) At the time, its primary competition was the Atari ST. In Japan however, Amiga's gaming force was nonexistent, as the industry was dominated by NEC's PC-88 and PC-98, Fujitsu's FME-7 and FM Towns, Microsoft's MSX and MSX 2, and Sharp's X1 and X68000. note If the Amiga was popular in Japan as a gaming machine, however, Hentai would seriously creep deeply and ferociously in the Amiga's scene with as many H-games on the platform as PC-98 and possibly even more, and in some cases would even take the lead on Amiga's library in Japan and eventually even leak towards European and North American scenes had its popularity become strong like in Europe.

The Amiga's heart was a set of extremely powerful custom integrated circuits designed by Jay Miner, who was also responsible for the custom graphics chips in the Atari 2600 and Atari 8-Bit Computers. These chips had names like "Fat Agnus"note Address GeNerator UnitS and included functions such as a "blitter", which allowed fast screen updates, and a "copper", which implemented scanline DMAnote Direct Memory Access (which eventually became a common trick on 16-bit consoles). The Amiga also included 4-channel, DMA-driven audio, which led to the development of the first MOD trackers, and the demoscene that surrounded them. Amiga could also "genlock" (synchronize input/output) to NTSC or PAL video, making it very popular with TV production facilities; NewTek developed the Video Toaster, an early 3D animation and video editor system, to work with the Amiga's genlock and overlay capabilities. Many TV shows in the late 1980s and early 1990s used Amigas for computer screens and special effects, notably The Chart Show and Babylon 5. The development of anime fansubs in the late 1980s is also tied to the Amiga and its genlock capabilities, as it represented the first method of overlaying subtitles on video on equipment affordable to the average user. Amigas were also used to power the Prevue Channel

, a US TV channel that was just listings for all your local cable channels scrolling in a loop on the bottom half of the screen; the top half would be taken up by cable network's promos, cable company-created ads, and Prevue-produced segments about what to watch. A similar network called Sneak Prevue was launched in 1991, showing previews for pay-per-view movies and such. However, the Amigas, lacking pre-emptive multitasking, were very error-prone and tended to crash frequently, leaving you with no guide or previews; by the late 90s, it began to suffer Network Decay, after TV Guide bought it and rebranded it as the TV Guide Channel, which eventually morphed into Pop TV; see that article for more. On the upside, however, when TV Guide came along, the Amigas were replaced with Windows PCs that definitely weren't as crash-prone.

On top of this was AmigaOS, an operating system that had one of the earliest implementations of preemptive multitasking on a consumer PC (though without memory protection), something that only expensive minicomputers and workstations offered at the time, and a relatively friendly GUI called "Workbench". The A1000 even had multiple desktops,

which provided prior art that defeated a patent troll.

Despite being ahead of its time, the released AmigaOS is not the advanced operating system the Amiga engineers originally wanted; due to software development on the original CAOS falling behind schedule, Commodore instead opted to build upon a 68000 port of TRIPOS, which forms the AmigaDOS component of the final OS while still providing the promised preemptive multitasking capability. Commodore later released a port of AT&T's System V Unix operating system that it dubbed "Amiga Unix". Of course, the Amiga 68k runs NetBSD.

Commodore eventually failed in 1994, and the Amiga, supported by fans, moved from company to company until settling down in 2000. AmigaOS was ported to the PowerPC and was sold on new hardware called the AmigaOne for a time in the early 2000s. AmigaOne is now selling a new computer, the AmigaOne X1000.

In 2022, Retro Games Ltd., the same company behind The C64 Mini microconsole, released a microconsole version of the Amiga 500 called The A500 Mini

. Like its predecessor, the user can load their own software and update the firmware on The A500 Mini via a USB flash drive.

Other machines compatible with AmigaOS 4

Notes for those who might want to buy hardware:

The Amiga gaming experience is surprisingly console-like, since most games boot directly from floppy disks. That said, floppies are slow and often need to be swapped on bigger games, so hard drive installs are recommended wherever possible.

For games that do not include their own installers from within the Workbench environment, you can use WHDLoad,

though do note that several games require at least 1 MB of Chip RAM to use it and will not work with systems with only 512 KB of Chip RAM. Some non-AGA titles may even require more than 1 MB, for which the only solution for A500 and A2000 owners is to track down a rare and often very expensive upgrade like the DKB MegAChip 500/2000.

Apart from the CD32, the main game-playing Amigas are the 500 and the 1200. Most A500 games will run on both, though for older or badly made titles, a piece of software called relokick may be required.

If you're using a 32-bit machine, you may also have to disable the CPU's instruction and data caches for a game to run properly, as self-modifying code (software that overwrote its own instructions with new instructions for performance reasons) was a popular trick at the time, but if not implemented in a way that took the 32 bit 680x0 chips' caches into account would lead to the code in the cache not matching the code in RAM, resulting in hard crashes. Kickstart 3 onwards had an early boot menu that gave you the option of disabling CPU caches if present. In the early days, game developers were encouraged to bypass the OS and access the hardware directly, optimizing performance at the expense of forwards compatibility. The 'correct' '80s Amiga is an A500 with the OCS and Workbench 1.2 or 1.3. You will also need some more RAM, preferably the A501 512k "trapdoor" card or one of its popular third-party clones.

The A501 Slow RAM expansion for the A500, and the A500+, A2000, A3000, and A4000 have a NiCd battery to back up the clock. With age, these batteries leak acid onto the motherboard, destroying any nearby traces or pins. If you're interested in an Amiga on eBay, demand to see a picture of the battery before you buy it. If there are signs of battery leakage and corrosion, find another one, or try to negotiate a lower price and repair the traces and sockets yourself if you're handy with a soldering iron and multimeter.

If you're a hardware maniac, however, the A1200 is the computer for you (unless you're willing and able to fork over the money for an AmigaOne-series machine, or you're willing to forego compatibility for raw power, in which case the A4000 is for you). It can be upgraded more than any other Commodore-era "classic" Amiga model, allowing you to install PCI cards (even graphics) with a busboard expansion, add a PowerPC processor, and even make it play nicely with the Wi-Fi network you have at home.

AGA machines, specifically the A4000T, while even more upgradeable and powerful than the A1200, have quirks that impedes backwards compatibility with certain pieces of software, especially games,note For example, the AGA graphics chipset do not support Chunky Graphics mode, causing slowdowns in certain pieces of software and thus are not recommended if your intention of ownership is to play Amiga games. We should also warn that even used AGA machines are usually ludicrously expensive. However, AGA machines are the go-to where non-linear video editing is concerned, as it's the recommended platform for running Video Toaster, the Killer App of the Amiga among production studios in the 80s and 90s, especially when it has been upgraded with a PowerPC CPU co-processor kit.

As of 2016, a new FPGA accelerator board known as the Apollo Vampire

hit the market, originally for the A600, and later, the A500 (which also works in the A1000 and A2000, with CPU slot adapters being made for the A2000 specifically to use the Vampire). For roughly the same price as an A1200, you get a 68080 CPU core that trounces even the 68060 in performance, 128 MB of RAM (which, by Amiga standards, is ludicrous), a SAGA (Super AGA) custom chipset reimplementation with retargetable graphics (RTG) and HDMI output, the ability to add cheap Ethernet modules for networking, and on the A500 version, an IDE/Parallel ATA controller and interface. On top of that, a standalone version for the V4 generation of the Vampire is under development, with no reliance on existing Amiga motherboards.

This upgrade alone, while unquestionably expensive (300 EUR/370 USD at time of writing), puts the OCS/ECS-era Amiga models on a level above and beyond the AGA ones, particularly those lacking 68060 accelerators and RTG cards that would normally sell for thousands of dollars by themselves.

There's also Amiga Forever, which is a collection (sold either as an ISO9660 image or a physical CD) containing system ROM images and OS disk images for all Commodore-era hardware and OS versions (that is, up to 3.1), for use in an emulator (such as WinUAE, E-UAE, or UAE).

that, when fed the official Kickstart ROM files, will allow emulation of a large number of Amiga machines from an SD card.

PowerPC-only games are marked with an asterisk.