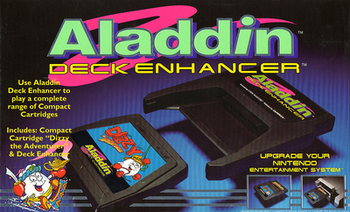 Upgrade your Nintendo Entertainment SystemTM
— Blurb on the packaging
Advertisement:

The Aladdin Deck Enhancer was an unlicensed add-on for the Nintendo Entertainment System created by Camerica and Codemasters. Depending on who you ask, it was either launched in North America in November 1992 or January 1993 and quickly cancelled due to Camerica going under or never made it to market at all. Either way, the Deck Enhancer is a somewhat obscure relic of video game history.

Prior to the launch of the Deck Enhancer, Camerica and Codemasters were strong partners and decently prolific supporters of the NES. They both had their hands in the Game Genie and released a few mildly successful unlicensed games for the system as a publisher and developer, respectively. Camerica found that producing their own cartridges while including special components to bypass the 10NES lockout chip was expensive and ate into their profits, so Codemasaters developed the Deck Enhancer to mitigate the costs.

Putting most of the cartridge components inside the Deck Enhancer meant games could be made and sold for much cheaper, with the intended MSRP being US$19.99 at most. The Deck Enhancer itself was set to sell for $39.95 with a pack-in game, which was the standard price of a regular NES cart back then. The business strategy looked viable on paper, and Camerica planned to expand it to other consoles.

The Aladdin Deck Enhancer was set to release while the Super Nintendo Entertainment System was still new, so Camerica decided to market it as a budget option for NES owners who didn't want to shell out money to upgrade. Camerica also wanted to hold onto the existing NES install base, especially since the system sold 34 million units in North America. While this seems sound at first, the gaming market isn't exactly known to be satisfied with what they have when new toys appear and the Console Wars were ramping up, so the Deck Enhancer likely wouldn't have succeeded in the long term. Camerica's abrupt bankruptcy killed the Aladdin Deck Enhancer before it could get going, which meant only 7 of its planned games were developed. We'll never know if their budget-conscious strategy would have had a chance at success.

It's not clear if the Aladdin Deck Enhancer ever made it to market officially. While it was definitely manufactured for the planned retail release, there are no clear records of it being sold and sources conflict on the supposed release date. The only thing that's sure is that Camerica went bankrupt in 1993 and most, if not all, of their Aladdin Deck Enhancer stock ended up in the hands of liquidators. Because of this, it's not too difficult find an Aladdin Deck Enhancer and a complete collection of its games in their original packaging.

Fun fact: Camerica got Thor Aackerlund, one of the winners of the 1990 Nintendo World Championships, to appear in TV ads to help market the system.

Games made for the Aladdin Deck Enhancer: