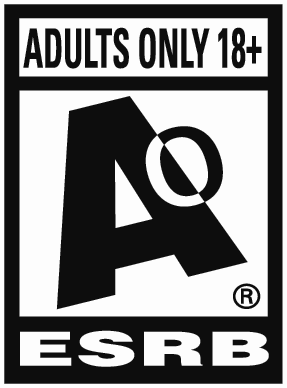 Statistically, the chances you've ever seen this sticker outside of an ESRB Ratings information guide are very low.
Advertisement:

The "Adults Only (AO)" rating is one of the age ratings in the Entertainment Software Rating Board rating system. The AO rating is given to games that are considered completely unsuitable for individuals under the age of 18 note which is the minimum age US law allows to purchase adult material, usually because they contain either explicit sexual content or, much less commonly, extreme violence. It is by far the rarest of all ESRB ratings, with fewer than 50 games ever actually receiving the rating — nearly all of which are only available on home computer, with the only ones that aren't being either on a non-major system, ultimately not released, or given the rating retroactively upon discovery of previously undisclosed content.

A common misconception is that getting an AO rating from the ESRB makes games illegal to sell to minors. This is not actually the case. Outside of a few Canadian provinces, the ESRB ratings themselves are not legally binding. However, it is illegal to sell or supply content deemed pornographic — including video games — to minors. Considering the content of most games that get the AO rating, it's not too hard to see why some might come to that conclusion.

One major reason so few games are rated AO is because most companies actively avoid earning the rating. While it's possible for ultraviolent games to get an AO rating note Hatred being a perfect example. The game actually built its entire marketing scheme around its rating. , in practice, the AO rating is almost never given to games that aren't pornographic. The rating's association with porn essentially means that, much like the NC-17 rating in film, no major retailer will carry AO-rated titles on their shelves, none of the major console developers will license AO-rated games for their systems, and many livestreaming platforms like Twitch forbid broadcasting of AO-rated titles. There isn't necessarily anything legally preventing them from doing so; they voluntarily refuse because they don't want to be associated with peddling pornography. As games are becoming ever more expensive to produce, this removal of distribution options is a death knell for commercial viability. Controversy might bring in cash to some extent, but if almost no one is willing to sell your product because of it, you stand to lose more than you could hope to gain.

On the other side, while pornographic games aren't particularly rare, very few of them have received the AO rating. Realistically, it's kind of pointless for a porn game to seek an ESRB rating: the primary reason for obtaining an ESRB rating in the first place is because many major distributors require games to have one before selling them...and these same distributors will not carry nor sell AO-rated games. Moreover, getting an ESRB rating is not free, and most outfits that make or localize pornographic games are fairly small, independent developers that aren't necessarily flush with cash. Given those two facts, there really isn't much incentive for a tiny developer whose only realistic distribution options are direct sales, digital storefronts, and maybe adult bookstores to seek out an official ESRB rating.

Even so, there are a small handful of games that have received an AO rating for reasons not related to explicit sexual content. As of 2021, only three games have been given AO ratings for violent content alone, one of which was never officially released. There's also an online gambling game with an AO rating despite having no other objectionable content; this rating was requested by the publisher in order to discourage underage gambling.

Please do not add examples; this page is Definition-Only and merely defines and explains the term.