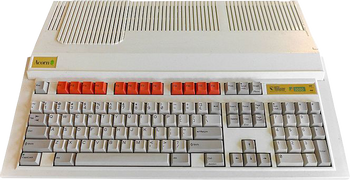 The Archimedes series was Acorn's follow-up to their reasonably successful BBC Micro line of computers. It's also probably the most important line of computers you've never heard of. The first systems were released in 1987, and like its contemporaries the Amiga and Atari ST it had advanced features like a 32-bit processor, high-quality graphics and sound, and a GUI with features Windows wouldn't get for years courtesy of the RISC OS. It therefore naturally disappeared into oblivion note (Well, near oblivion; like the Amiga, it's kept alive by enthusiasts) along with the manufacturer in the mid-1990s. Like the BBC Micro, it mostly carved a niche for itself in the British educational market until it was supplanted by Windows PCs and Macs. The Archimedes line later developed into the RISC PC

The Archimedes was known for its library of edutainment Adventure Games often designed around school history projects. Also, like the BBC Micro, it had a battery of cheerfully ripped-off classic arcade games (e.g., Meteors for Asteroids.)

What really makes the Archimedes interesting is the processor. Whilst other systems at the time tended to use the Motorola 68000 as the processor of choice, Acorn instead chose to design their own processor. Like other new CPU designs at the time, it used a RISC architecture, which gave their new CPU a relatively simple design that used little power, but gave high performance. This Acorn RISC Machine proved to be amazingly successful, but not for its original platform. The low-power-but-high-performance nature of the ARM design was recognised by, amongst others, Apple, who wanted to use the CPU in their notepad sized touch screen computer — the Newton. This led to the processor side of Acorn to be spun off in into Advanced RISC Machines (now Arm Ltd, stylised as "arm"). The ARM design spread to many low-powered devices, and has outlived the original Acorn Computers by more than 20 years—longer than Acorn Computers existed.note Acorn Computers was founded in December 1978 and went under in January 1999. Arm Ltd was spun off in November 1990.

Nowadays, ARM-based processors are used by most mobile phones, MP3 players, a fair number of netbooks, and even the ARM-based iPad. And in November 2020, Apple began to transition its Macs from Intel processors to in-house ARM chips by introducing its first ARM-based Macs, bringing the platform full circle back to its roots as an efficient desktop processor. It's often found in routers, set-top boxes, and other embedded applications (although MIPS architecture is more common there.) If you've got some kind of handheld device like a mobile phone or an MP3 player, it's probably running on an ARM CPU, and thus is a descendant of the Archimedes. The widespread usage of ARM processors has also given rise to a niche market of hobbyist-oriented computing devices based on ARM processors, some of which can even run RISC OS.