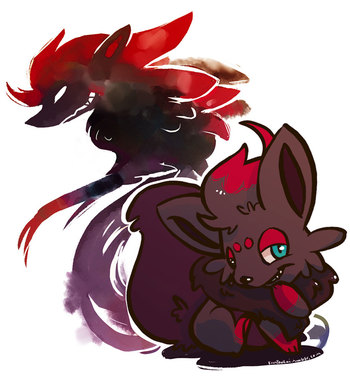 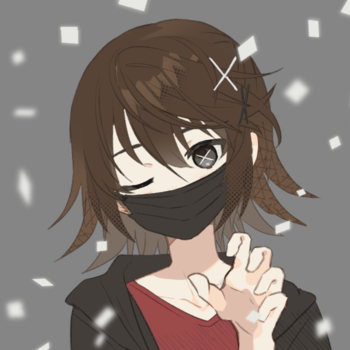 Just a part-time Troper slash gamer who loves Assassin's Creed, Kagerou Project, and Boku no Hero Academia. I've been a Troper since May 5th, 2018, and tend to hang around either the Trope Finder or the Forum Games and do occasional cleanups to pages on this site.

I'm from the Philippines, nonbinary, INTP, and a Ravenclaw. I draw and write on occasion (though you probably won't see that stuff here) so I have accounts on Archive Of Our Own

. And just because I see a lot of people doing this, the 3 characters that describe me best are Shintaro Kisaragi, Sou Hiyori, and Pride.

. My Discord is Kurogiri#2160 and I also have a YouTube channel, but don't be shy to message me or vandalise my wall if you want to talk to me here. And if that wasn't enough, well, here's a more unnecessarily detailed take at my Listography

Feel free to listen to this while reading the page

open/close all folders
My Fandoms (Video Games)
My Fandoms (Anime & Manga)
To see a much more accurate representation of the animanga I follow (as these are only the ones I'm currently interested in), check the Works I Am Familiar With folder.
My Fandoms (Literature)

Tropes I plan to create:

Pages I plan to create:

Works I Am Familiar With
If the work is in italics it means I want to play/watch/read it when I get the chance.

If the work is in bolded italics it means I've actually played/watched/read it before.

If the work doesn't have any of these or a comment below it, it means I'm only as familiar with it as any average fan.

...Honestly, at this point this section's grown so absurdly huge that it would be a lot less tedious to just link to the list

Films Western Animation Video Games note Ones that don't fit in large franchises, or are more minor than the interests listed in the fandoms folder. Web Comics
Tropes That Apply To Me
Me, failing at Getting Over It with Bennett Foddy: FUCK! MOTHERFUCKING ASSHOLE PIECE OF SHIT! I'M FUCKING DONE WITH THIS FUCKING GAME! FUUUCKKK!
Player A, after I told him I was from the Philippines: So, do you guys have—you know, computers and stuff over there?
Me: ...How do you think I'm talking to you right now?
Player B (referring to me): For fuck's sake, it's not like he lives in Nigeria.
Player A: Oh.
Tropes I Like (WIP)
Shipping Disaster
WIP. Moved to a seperate folder because it was getting too long.

Tropes I Dislike
somethingwhatever
A folder for...something. Soon. What is it, exactly? Who knows.

If you were looking for my original characters, they've been moved to my Sandbox page.

Troper Leitmotifs
An idea I stole, uhhh I mean borrowed from DrNoPuma. To put it simply, this section is where I assign Leitmotifs to users on this site for absolutely no reason whatsoever.

(turn on subs for the latter). Speaking in terms of Humour Mode, though, I'd have to go with Bitch Lasagna But It's Actually Unravel

Some leitmotifs other Tropers have assigned me are Last Surprise

(by Baisteach) and Drive It Like You Stole It

Most of these will be memes so I'm sorry for making you guys listen to earrape covers.

Frequently Asked Questions
Go above and beyond! PLUS ULTRA!