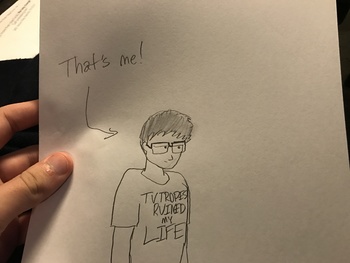 Yep, I drew that. But in real life, I'm a bit tubbier.
"Except for death and paying taxes, everything in life is only for now!"
— Avenue Q

Oh, hai, troper. My name is Garrison, also known as tvtropesruinedmylife22. I'm currently a high school student. I got into TV Tropes a couple years ago, and I was instantly hooked. Creating a wiki to detail everything about tropes in media? Given the way I am, how could I not be interested? Anyway, I intend on going to college and graduate with a degree in architecture. I also hope to be involved in the film industry at some point because I am a massive film geek. I am agnostic, but I don't have anything against any religion (as long as you're not in my face about it). Before I list tropes about me, I will tell you of the various pieces of media that I am a fan of. So here it is:

And now, without further adieu, to list the tropes of ME!

This dude shows examples of the following: