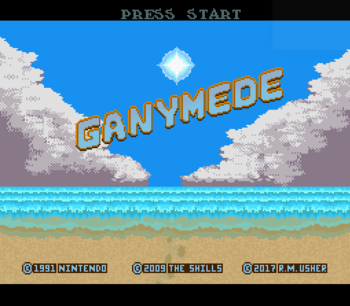 Land of no shame
"It started off with nothing left to desire."

Ganymede is a conversion ROM Hack of Super Mario World by R. M. Usher. Originally made as a re-imagining of the vanilla game entitled Thoughtful Mario World, Ganymede is an adaptation of an obscure concept album by The Shills, covering themes of loneliness, alienation, anger and hope.

The game's protagonist is the man on the boat, a nameless guy who has tried his whole life to fit in with the wider world and has finally declared the experiment a failure. Figuring there is no point in trying to deal with people, he sets off on his boat into the open sea. A squall blows through and destroys the boat, and when he awakens, he has washed up onto the shore of an island. Wreckage is strewn about and not one single human being is within many nautical miles. Deciding that this is a fortuitous turn of fate, the man on the boat sets about to make this beautiful place his new home, sharing it only with his own thoughts.

Unfortunately, his thoughts soon prove to be far more unpleasant neighbors than the self-obsessed and shallow human race he sought to flee from. What chance does a man have against his own doubts?

You can find the game as an .ips patch on ROM Hack archive SMWCentral

Tropes that apply to Ganymede:

The Man in Charge: